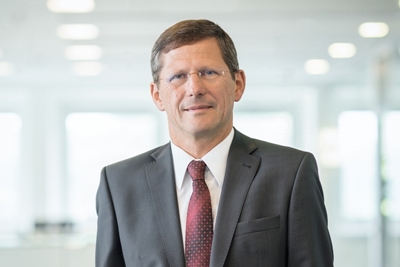 For the 12 months ending September 30, 2018, the Oberkochen-headquartered firm posted sales of €5.8 billion – up 9 per cent on the prior year, despite some negative impact on revenues related to currency fluctuations. It means that Zeiss has now posted record sales the past nine years in a row.

At €772 million, the company's pre-tax earnings were virtually the same as the previous year, while orders jumped 7 per cent to stand at just over €6 billion.

CEO Michael Kaschke, who a year ago had predicted only a “slight” organic increase in sales, highlighted the two sectors that provided much this year’s impetus in a company release, saying:

“All Zeiss segments and regions contributed to this outstanding result. Our innovative products for the semiconductor industry and medical technology in particular ensured significantly greater, above-market growth dynamics.”

Figures show that sales attributed to the company’s semiconductor manufacturing technology division - now partly owned by the dominant lithography equipment company ASML – rose around 25 per cent for the second year in succession, to stand at €1.53 billion.

Zeiss’ medical division, which largely – though not entirely – constitutes its Carl Zeiss Meditec subsidiary, delivered an 8 per cent increase in revenues to €1.55 billion, almost exactly the same figure as the company’s industrial quality and research unit.

On the negative side, Zeiss said that its camera lens business did not meet its targets for the year, suffering from a broad market trend away from traditional photography equipment. 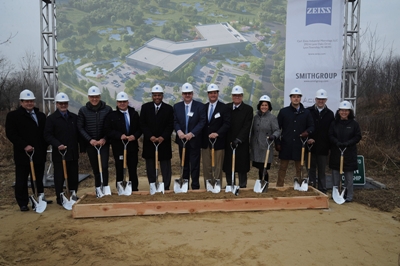 Global expansion
While the US remains Zeiss’ largest region for revenue generation, China has now overtaken Germany as the company’s second-largest market, with sales in Asia overall rising 13 per cent to €1.41 billion.

With its sights now set on exceeding €6 billion in sales, Zeiss is busily expanding in a variety of locations. The company’s newly appointed CFO Christian Müller said: "We are not only investing in technology and infrastructure at our existing sites worldwide, but are also progressively increasing our presence at new centers for high technology and digital innovation in Karlsruhe, Munich and Shanghai.”

Zeiss is also building in Detroit, where it expects to employ another 170 employees by 2020 in a new unit dedicated to metrology applications that will also serve to consolidate four existing sites in Michigan under a single roof.

Jochen Peter, who heads up the firm’s industrial quality and research segment, said that Zeiss was investing over $45 million in the Detroit metro region to strengthen its engagement with what he called a “global hot spot” for the automotive industry and smart factories.

“This will not only have a strong, positive impact for our customers and partners in North America, but will also generate new momentum for the whole industrial quality and research segment of Zeiss worldwide,” he added.

R&D spending up again
Despite noting the more muted growth of the global economy now evident, and the potential impact of trade barriers, CEO Kaschke said that the company’s continued investment in optical technology innovation would stand it in good stead for continued growth.

Research and development spending now stands at €642 million, up nearly €100 million on the prior year and equivalent to 11 per cent of revenues. A substantial chunk of that total is going towards semiconductor manufacturing developments, not least the future generation of high-NA optics required for extreme ultraviolet lithography systems.

“Even if, in light of the economic forecast, momentum in the segments and regions will vary, we anticipate continued organic growth overall with a stable EBIT (earnings before interest and taxes) margin,” Kaschke said.

“The growth drivers are the company's high-tech solutions, which will play an important role in all key future trends - from digitalization and smart production to healthcare in an ageing society.”

Now employing nearly 30,000 people, the continued success means Zeiss is set to pay a dividend of €54.3 million to its sole shareholder, the Carl Zeiss Foundation - one of the world’s largest foundations committed to the promotion of science.