...while the European Southern Observatory's ELT telescope will be powered by the sun. 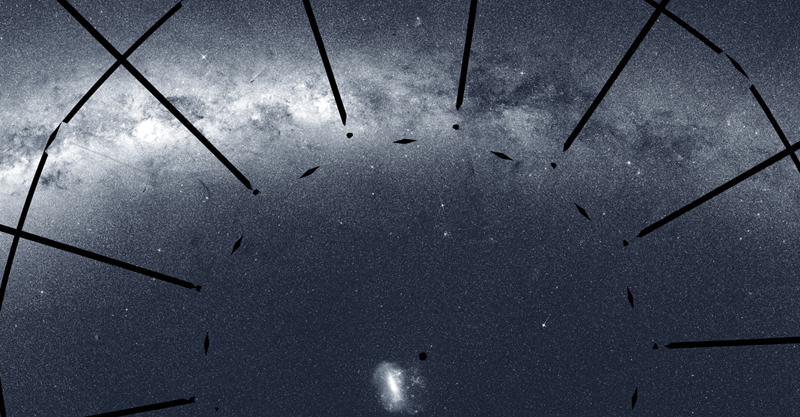 The Milky Way (upper left) arcs across a starry landscape in a detail of NASA's newly-released TESS Southern Sky mosaic.

The glow of the Milky Way — our galaxy seen edgewise — arcs across a sea of stars in a new mosaic of the southern sky produced from a year of observations by NASA’s Transiting Exoplanet Survey Satellite (TESS). Constructed from 208 TESS images taken during the mission’s first year of science operations, which were completed in July, the southern panorama reveals both the beauty of the cosmic landscape and the reach of TESS’s cameras.

“Analysis of TESS data focuses on individual stars and planets one at a time, but I wanted to step back and highlight everything at once, really emphasizing the spectacular view TESS gives us of the entire sky,” commented Ethan Kruse, a NASA Postdoctoral Program Fellow who assembled the mosaic at NASA’s Goddard Space Flight Center in Greenbelt, Maryland.

Within this scene, TESS has discovered 29 exoplanets, or worlds beyond our solar system, and more than 1,000 candidate planets astronomers are now investigating. TESS divided the southern sky into 13 sectors and imaged each one of them for nearly a month using four cameras, which carry a total of 16 CCDs. The TESS cameras capture a full sector of the sky every 30 minutes as part of its search for exoplanet transits.

Transits occur when a planet passes in front of its host star from our perspective, briefly and regularly dimming its light. During the satellite’s first year of operations, each of its CCDs captured 15,347 30-minute science images. These images are just a part of more than 20 terabytes of southern sky data TESS has returned, comparable to streaming nearly 6,000 high-definition movies.

In addition to its planet discoveries, TESS has imaged a comet in our solar system, followed the progress of numerous stellar explosions called supernovae, and even caught the flare from a star ripped apart by a supermassive black hole. After completing its southern survey, TESS turned north to begin a year-long study of the northern sky.

TESS is a NASA Astrophysics Explorer mission led and operated by MIT in Cambridge, Massachusetts, and managed by NASA’s Goddard Space Flight Center in Greenbelt, Maryland. Dr. George Ricker of MIT’s Kavli Institute for Astrophysics and Space Research serves as principal investigator for the mission.

The following video shows how NASA’s Transiting Exoplanet Survey Satellite (TESS) spent the past year imaging the southern sky in its search for worlds beyond our solar system:

The European Southern Observatory (ESO) is taking important steps to make its revolutionary new ground-based telescope greener. Next year, a power conditioning system and a photovoltaic plant will be installed at the site of ESO’s Extremely Large Telescope (ELT) with operations of both systems starting two years later. 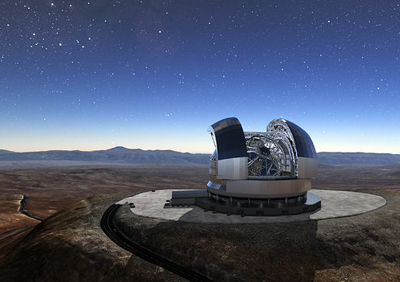 Sun-Powered: Cerro Armazones, in Chile, to be site of the ELT.

One of the biggest challenges in the construction of ESO’s ELT in Cerro Armazones, Antofagasta, Chile, is to ensure access to a clean and highly reliable electrical supply.

Since the telescope is located close to areas that receive some of the highest amounts of solar radiation in the world, this goal can be achieved by installing and operating a power conditioning system to the grid supply and a photovoltaic plant, independent from the grid generator.

ESO has signed a contract with the Chilean power company SAESA to install and operate both facilities. The electrical power conditioning system will provide highly reliable electricity, will have full backup capacity, and one standby unit for redundancy or maintenance. The photovoltaic plant will use renewable energy to supply electricity to the telescope during the day.

The photovoltaic plant will also serve as a backup energy plant to the region of Antofagasta as it will be able to supply energy to the local community via the grid in case of a widespread power outage. The power plant is part of ESO’s organisational efforts to reduce its carbon footprint. For the ELT, the saved energy will be significant, since the world’s largest telescope will consume most energy during the day, to stabilise the temperature of the telescope and of its optics located inside the dome.