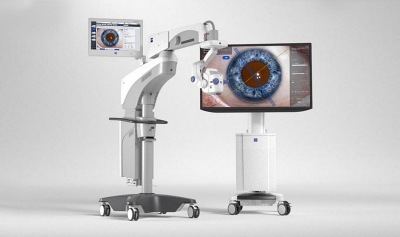 Bucking a trend that has seen several key photonics markets slump this year, Carl Zeiss Meditec has announced a record-breaking sales figure of €1.46 billion - up 14 per cent year-on-year.

For the 12 months ending September 30, the Jena-headquartered company also posted a healthy rise in profitability, with pre-tax earnings up nearly 30 per cent, to €230 million.

Noting solid performance across all geographies, as well as both of the company’s business units, CEO Ludwin Monz wrote in the firm’s annual report:

“Once again, we grew considerably faster than our markets. We are optimistic about the new year, too: right now we can’t see any signs that the positive outlook is clouding over.”

Robot vision
Monz highlighted Meditec’s “KINEVO” robotic visualization system as one of the key contributors to the successful year enjoyed by the company’s microsurgery business unit.

The CEO also pointed to the introduction of its first digital microscope for surgical ophthalmology as evidence of innovation-fueled business growth - and to the need for artificial intelligence to meet growing image analysis demands prompted by such technologies.

Monz added that he expected the company to allocate even more resources to its research and development efforts - Meditec already spends 12 per cent of revenues on R&D - to continue innovating.

“This level of investment is significantly higher than that of comparable competitors,” he noted, pointing to a policy of “agile” innovation, and close interaction with physicians and surgeons in the development process.

Meditec’s microsurgery unit, which is focused on assisting minimally invasive treatments - including neurosurgery and spinal procedures - saw a 12 per cent increase in sales in the latest financial year, as revenues reached €391 million.

The larger “ophthalmic devices” division reported a slightly larger rate of growth, as its revenues topped €1 billion for the first time.

“Significant drivers of this revenue growth were once again laser systems for vision correction, as well as devices and consumables for cataract surgery,” reported the firm.

Intended to help people in remote areas access the specialist kit, Meditec's equipment is said to have examined more than 300,000 patients to date, across more than 1000 towns and cities.

Writing in the same annual report Michael Kaschke, CEO of parent company Zeiss, reiterated the underlying trends that the medical technology market continues to benefit from, despite the wider economic gloom.

“These are based, on the one hand, on demographic trends and the associated ageing population, as well as an increasing number of people with age-related diseases as a result,” noted Kaschke.

“On the other hand, patients’ expectations of medical treatments and, consequently, the demands put on medical equipment by physicians, are increasing.”

He adds that, although the Meditec subsidiary’s focus on innovation and a diversified product portfolio has put it into a strong competitive position, the company still faces a major challenge in the form of digitization.