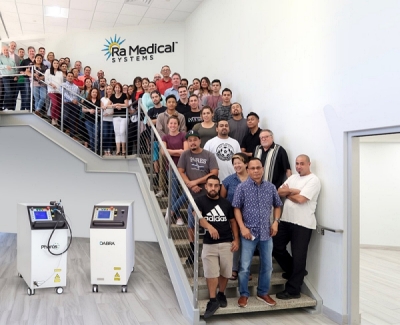 Carlsbad-based Ra Medical Systems, a small developer of an excimer laser approach to treating blocked arteries and skin conditions, is now under investigation by both the US Department of Justice (DOJ) and the Securities & Exchange Commission (SEC).

Details of the twin investigations were revealed in the firm’s latest SEC filings, which coincided with its financial results for the September quarter.

In its financial release, Ra Medical reported a net loss of $17.4 million on sales of just $1.9 million for the three months that ended September 30.

That brought its cumulative losses for the first nine months of 2019 to $47.2 million - much wider than the figure of $15.8 million for the equivalent period last year.

Those losses appear largely due to a huge increase in selling, general and administrative costs, accompanied by only a slight uptick in sales.

And it means that the company has already burned through much of the cash that it raised just over a year ago in its $68 million initial public offering of stock (IPO).

Executive stress
The latest report covered a period during which Dean Irwin - the company’s co-founder, CEO, CTO, chairman, and co-president - was fired from the CEO position “without cause”. In August, Irwin was replaced on an interim basis by CFO Andrew Jackson, before Irwin subsequently resigned from the company’s board of directors following a one-line email to his former colleagues.

A former PhotoMedex executive, Irwin had co-founded Ra Medical back in 2002 with former Eli Lilly and Kellogg Company marketeer Melissa Burstein. In late October Burstein was also terminated by Ra Medical "without cause".

There now appear to be serious concerns about the company’s technology and the way that Ra Medical was attempting to sell it.

In October the firm announced that its internal audit committee investigation, aided by independent legal counsel and launched after an employee raised their concerns, found no fewer than eight significant issues that required addressing.

Among those were disclosures that catheters used in Ra Medical's “DABRA” (Destruction of Arteriosclerotic Blockages by Laser Radiation Ablation) technique frequently failed to calibrate correctly, and that company salespeople had been incorrectly instructed to characterize DABRA as performing atherectomy - something it is not yet fully cleared to treat.

It was also found that the company had an inappropriate “tone at the top”, said to have been set by certain members of senior management, and a lack of sufficient competent resources in key roles at the organization. In addition, questions have been raised about $300,000 in payments made to certain physicians.

Criminal investigation
In a bid to help rectify matters, the company has now appointed a VP responsible for clinical, quality, and regulatory matters.

But according to the company’s latest “10-Q” filing with the SEC, the situation has escalated further in the past few weeks. In that filing, the company reports that:

“In November 2019, we learned that the DOJ has opened a criminal investigation relating to the company.” That was on top of an earlier civil investigation DOJ officials launched into whether Ra Medical has paid improper remuneration to physicians and other healthcare providers.

The SEC is also getting involved: “We received a letter on November 13, 2019, from the Los Angeles Office of the Division of Enforcement of the SEC, in which the SEC notified us that it is conducting an investigation,” stated Ra Medical. “We have been, and intend to continue cooperating with the SEC in this investigation.”

• Since completing its IPO at a launch price of $17 per share, Ra Medical has dropped in value steadily. The latest revelations have seen that downward trend continue, with the stock currently trading at around $1.30 on the Nasdaq.