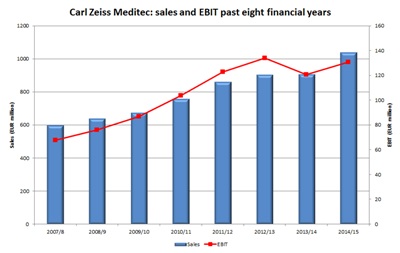 Carl Zeiss Meditec, the healthcare equipment division of the German optics giant Zeiss, has smashed its annual revenue target after posting sales in excess of €1 billion for the first time.

At €1.04 billion, the publicly listed company’s revenues for the year ending September 30 were up 14 per cent on the previous 12 months. And although the weak euro currency accounts for nearly half of that growth rate, the result still saw the company’s stock price rise close to a 15-year high on the Frankfurt exchange.

Leading the charge was Meditec’s surgical ophthalmology division, where sales of €355 billion soared 19 per cent year-on-year, even after currency effects are taken into account.

As well as reflecting on the International Year of Light (IYL) in his annual letter to shareholders, Monz commented on the increasing impact of optical coherence tomography (OCT) as a diagnostic tool.

He wrote that OCT was now a key technology in Meditec’s ophthalmic systems business unit, but also emphasized the competitive pressure in the diagnostic side of health care applications. The CEO says that innovations such as the new angiography function offered by Zeiss’ OCT tools are helping to set the company apart from its rivals.

“With the angiography function, physicians can visualize the blood vessels of the retina in 3D,” Monz explained. “Contrary to conventional angiography, this procedure does not require the use of contrast media, which is a decisive clinical advantage.”

Research drivers
With the Meditec income statement showing that the company spent nearly €112 million on research and development in the latest financial year (up from €99.8 million in 2013/14), the company’s annual report highlighted where some of that cash is being directed.

In an interview published in that annual report Monz and Stefan Nolte, head of ultrafast optics at the Jena-based Fraunhofer Institute for Applied Optics and Precision Engineering (IOF), discussed the current avenues for ophthalmology research and the potential for ultrafast lasers to play a future role in diagnostic and therapeutic equipment.

Monz said that he saw two challenges in particular: improving the resolution of diagnostic imagery and revealing structures within the eye that are currently hidden from view.

The Meditec CEO also highlighted that there is likely to be a steep rise in the incidence of eye diseases as the global population ages, as well as growing demand for interventions to treat presbyopia – the “stiffening” of the eyeball that affects people from middle age onwards.

Meditec and Nolte’s laboratory have previously worked together on new ways to treat presbyopia, with Nolte saying that the condition has turned out to be a lot more complex than he had previously appreciated. He added that any progress here will require broad, interdisciplinary collaborations.

Outlook
Despite the somewhat gloomy predictions for the global economy as China’s recent rate of growth slows, Carl Zeiss Meditec’s executives are anticipating reasonable growth in the medical technology sector – albeit with an increased emphasis on the role that technology can play in reducing the cost of health care.

“The products and procedures of medical technology manufacturers shall no longer be measured based only on their effectiveness and safety, but also on their cost efficiency,” they wrote in their outlook for the current financial year.

That should translate to overall sales growth of up to around 5 per cent in the current financial year, excluding any currency effects.