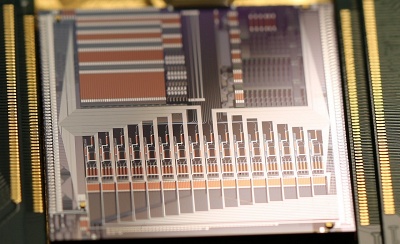 Scantinel Photonics, a German startup developing frequency modulated continuous-wave (FMCW) lidar based on photonic integrated circuits (PICs), says it has extended its series A funding round to €10 million.

Based in Ulm, the company has now attracted backing from PhotonDelta - a partnership of industry and university research groups based in The Netherlands that is focused on PIC technology and applications.

FMCW roll-out
Scantinel, which is one of only a few lidar firms working on FMCW technology, says it will use the series A funding to accelerate product development and roll out its PIC-based devices to customers. A number of partnerships with “major global automotive, mobility and industrial companies” are said to have been signed already.

The FMCW approach has a number of advantages over conventional lidar - most obviously much more compact chip-based systems, and the ability to measure both the position and velocity of objects surrounding a vehicle or industrial robot.

That is possible because the technique is based around a frequency-chirped laser source rather than a simple time-of-flight pulse measurement, meaning that the Doppler Effect can be used to deduce both the speed and direction of objects in the field of view.

However, this adds complexity to the photonic system required. Other companies developing FMCW lidar include SiLC Technologies, Aeva, and Aurora Innovation. Intel has also devoted a research group to the topic, while Australia’s Baraja uses a similar approach employing random frequency modulation.

“Lidar has more accuracy and precision in detecting objects and mapping than other solutions such as radar and RGB cameras,” Scantinel says.

“It is also more immune to interference. This makes it ideal for enabling autonomous driving, as well as within logistics - such as conveyor belts and autonomous cranes.”

European photonics ecosystem
However, as the company points out, most lidar sensors have proved too large, expensive, or difficult to produce to find mass applications.

“Scantinel has developed its groundbreaking FMCW lidar solution, which has the power, affordability, and mass production scalability to enable lidar to have broad application across industry and mobility,” claims the Ulm company.

“The technology delivers a detection range beyond 300 meters with superior resolution and solid-state scanning.”

The investment by PhotonDelta comes just a few months after the group of industry and university researchers, whose stated mission is to to build a European photonics ecosystem, secured €1.1 billion in a public-private investment.

Its aims include support for as many as 200 startups, scaling up PIC production, and creating new applications for the devices.

Scantinel’s technical managing director Andy Zott said of the latest support: “We see a great value having PhotonDelta as an additional investor, and we are looking forward to maximizing the collaborations and benefits from PhotonDelta’s leading integrated photonics ecosystem.”

PhotonDelta CEO Ewit Roos added: “Photonic chips are a next-generation chip technology which will bring new innovations like FMCW lidar on chip to life and we are excited to ride along this journey with Scantinel. We see the investment in Scantinel as a perfect fit to grow and strengthen our photonics ecosystem.”