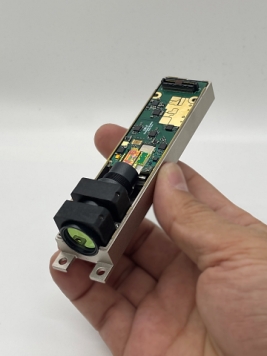 California-based SiLC, which raised $17 million in venture funding last year and was founded by former Kotura and Mellanox Technologies executive Mehdi Asghari, revealed that AutoX will be using its “Eyeonic” vision chips to deliver both range and velocity information to some of its “Level 4” autonomous vehicles.

It said that AutoX was planning to equip “a number” of its 1000-strong robotaxi fleet with the Eyeonic sensors by the end of this year.


Typical lidar systems include pulsed, phase-modulated, frequency-modulated continuous-wave (FMCW), and random-modulation continuous-wave (RMCW) designs. SiLC is one of a number of companies developing FMCW lidar. Other developers are focused on FMCW, including Aeva, Aurora Innovation, Scantinel Photonics, and LuminWave - as well as a research group at Intel. While Baraja's system uses RMCW.

SiLC says that by adding instantaneous velocity measurements to each voxel in a lidar map, the AutoX perception stack will be able to quickly detect, classify, and predict the path of dynamic objects around a vehicle.

“This is a key feature that enables higher performance of autonomous vehicles in crowded city environments,” added the startup firm. “This is very similar to how human perception works.”

SiLC explains that in humans, the eye is an extension of the brain, and able to “pre-process” vast amounts of information. Our retinas contain large numbers of motion-sensitive cells, making us immediately aware if something moves within our field of vision.

“Only then do we use our high-resolution cells to identify the objects of interest,” adds SiLC, saying it has designed instantaneous motion detection into its technology, making it faster than traditional lidar approaches.

Professor X
In a release detailing the deal with AutoX, SiLC said that the Shenzhen-headquartered firm already has a robotaxi fleet of 1000 vehicles, and that it had recently unveiled the first automated production facility in Asia for making Level 4 autonomous vehicles.

Founded by MIT graduate Jianxiong Xiao - also known as “Professor X” - AutoX says that its mission is to “democratize autonomy”, and to accelerate the advent of fully driverless cars.

“We’re excited to work with the world’s leading 4D lidar chip supplier,” said CEO Xiao, also the founding director of Princeton's Computer Vision and Robotics Labs. “Together, we are building safer transportation and bettering lives for the world.”

Asghari claims that SiLC has also demonstrated the longest-range FMCW lidar operation so far. “This and the combination of precision velocity enables a vastly simplified and lower latency perception stack,” he said.

Launched in December 2021, SiLC’s Eyeonic product is based on silicon photonics technology, and is said to be compatible with large-scale production with conventional semiconductor manufacturing equipment.

The chip-scale lidar uses coherent optics and a “chirped” laser source to provide polarization intensity data as well as positional and velocity information, which is said to make the approach even more similar to human visual cognition.

Aside from the AutoX deal, SiLC has agreed a strategic collaboration with Japan’s Hokuyo Automatic, with a view to deploying FMCW lidar in industrial automation settings.

“We are the only company to prove our full FMCW chip integration under the microscope,” claims the firm. “Our steadfast commitment to [commercialization] will enable applications ranging from mobility and robotics to security, AR/VR, and biometric scanning.”