Photonex 2021: Developing the role of photonics in a changing world 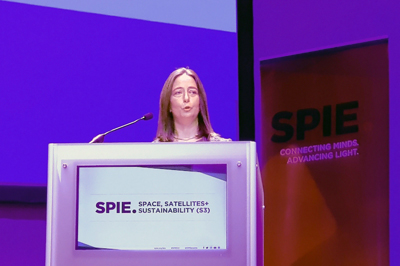 Carol Monaghan bangs the drum for the photonics industry.

For decades, the photonics industry has been at the forefront of global innovation and research. Developments such as advanced LIDAR systems for autonomous vehicles, secure quantum computers and 5G communications, ensure that this sector remains as relevant as ever with the potential for major growth across multiple technologies.

However increased threats to national security mean that the importance of this industry goes beyond basic economics. Set against a backdrop of a challenging funding landscape, can governments really afford not to invest in photonics and quantum?

At this week’s Photonex and Vacuum Technologies conference, plenary presenter Carol Monaghan, MP, who represents Glasgow North West, argued for greater funding for research, higher salaries for new entrants to the industry, and for greater diversity in recruitment.

She told the gathering at the SEC, Glasgow, where the Photonex conference is taking place, “I take this opportunity to pay tribute to the people here who are involved in the education and training of the next generation of engineers and technicians. Your efforts in this area and arguably just as important as the research and developments that you are involved in.

“Across Scotland, the photonics sector provides employment for around 3000 people. Companies such as Thales, Leonardo, Coherent, M Squared, and CST Global are of key importance to the Scottish economy. Laser sales alone are in excess of £200 million per annum with phot in Scot contribute over £1 billion annually to the Scot economy and crucially over 90 per cent of those sales are exports.”

One indication of the significance of Scottish photonics is last week’s visit by Dr Graeme Malcolm OBE, the CEO and founder of M Squared, which is also based Glasgow, to see UK Prime Minister Boris Johnson, “to chat about our work on climate emergency measurement and quantum computing.”

Super to be @10DowningStreet and to be able to chat with Boris Johnson about our work @m2lasers on climate emergency measurement and quantum computing. pic.twitter.com/R1l4FNoU5f

Despite the sector’s recent successful period of several decades’ growth, Monaghan considered why the photonics sector still has work to do to make its voice heard and raise awareness of its growing significance.

She said, “When I started working in politics [in 2015] after 20 years as a physics teacher in Glasgow, one thing I wasn’t prepared for was the intense political lobbying by defense, pharmaceutical, and aerospace companies, all with their particular asks. But there was little lobbying specifically from the photonics industry.

“So five years ago, I set up the All-party Parliamentary Group on Photonics at Westminster to increase understanding. Recently this group has been expanded to include quantum technologies. When I started the group, there was poor understanding amongst many politicians amongst many politicians of the applications of photonics and indeed what it actually is. There are still few MPs with backgrounds in physics and engineering.

“Now photonics has more than 1500 companies across the UK, employing more than 75,000 people. Its economic impact is impressive with a sustained growth of 68% per annum over the past three decades and an annual output of £14.5 billion. That is indeed comparable to the giant pharmaceutical industries. But the key point about photonics is that it enables other sectors to be competitive – with 10 percent of UK jobs depending on it.

She then asked what are the key challenges facing this sector – and proposed several remedies to deal with these. “We must be alert to the impact of political direction on industries such as photonics. Last year we saw the UK Government perform a U-turn on its decision to include Huawei at the core of our 5G network.

“This episode demonstrates why there must be an understanding of what a particular technology can do and the threat that cutting edge technologies could pose to our economic success and to national security if they are developed elsewhere. The same could be said of the UK’s space sector,” she said.

“With much work being done at a research level, how do we commercialize this activity to ensure that this technology remains in the UK where it has been developed? This depends on proper funding and a recognition that applications may not be obvious at that time.

“We are still seeing too many startups and SMEs struggling to secure funding when there is a need to scale up manufacturing. The terms around Innovate UK loans are considered both restrictive and risky so SMEs naturally may look elsewhere for scale up funding. But all too often this funding is coming from foreign rather than domestic investment.

“Therefore we must see UKRI and the proposed UK Advanced Research and Invention Agency (ARIA) properly fund future quantum and photonics innovation. This support is needed to develop people, facilities and capabilities in multiple institutions across the UK,” she said.

“Developing new systems and devices involves innovating processes that adapt to new optical phenomena. Agencies and researchers need to balance between different types of research including novel phenomena and materials whose immediate applications are not obvious. The very diversity of photonics means innovations in unlikely areas can have huge and lasting impact. As Steve Jobs acknowledged people don’t know what they want until you show it to them.”

Monaghan concluded, “Across the world there is challenge to grow talent and companies need to be prepared to pay for the skills and the staff that they need. When bright graduates are offered poor salaries to work in photonics when graduat jobs in retail and finance are much more richly rewarded is it any wonder that they take their potential elsewhere. Finally, I would urge you to continue dialogue with your political representatives to ensure that the needs of this sector are not overlooked.”