by Matthew Peach in Coventry 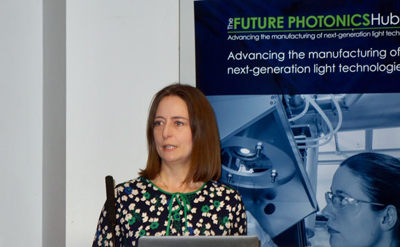 At the 28th edition of Photonex, the UK's leading exhibition and conference dedicated to photonics technologies, there were a wide range of talks on imaging, lasers, optical technologies, stretching from pure research to development of new advanced user solutions. The event is in the process of being acquired by SPIE, publisher of optics.org.

The two-day conference program included an address by Carol Monaghan, a politician, notable for having graduated in laser physics (from Strathclyde University in Glasgow) and having worked for 20 years as a physics teacher before being elected to the UK Parliament in 2015.

But besides congratulating the industry on its growth rate and innovations, she demanded that the work opportunities it offers be opened up to a wider cross-section of society, especially towards women.

As a Scottish National Party MP, Monaghan is passionate about her home country but she is also a champion of photonics. She neatly combined the two ideas when she proudly pointed out that photonics worldwide actually has its roots in Scotland in the 19th century: “the father of photonics was James Clerk Maxwell of Edinburgh,” she noted.

Less a source of pride was the recent uproar in her own workplace, the House of Commons, associated with the often heated Brexit debates and the UK Government’s failed attempt to suspend parliament, last month. “Things are a little fluid in the political world at the moment considering the madness – or should that be mad house,” she said.

On a more positive note, she took the opportunity of the gathering in the Ricoh Arena conference center to congratulate the audience of photonics industry figures. “The photonics industry in the UK is pretty unique in that it continually seems to see year on year growth, and has shown 8.4% growth in the past year alone.”

She sang the praises of The Central Belt of Scotland, which “is now a real powerhouse for photonics, so today’s Scottish graduates don’t always have to leave their home country in order to seek employment.” Looking at the wider national picture, she continued, “One of the huge strengths of this sector in the UK is that there are broad pockets of photonics development all across the country so that bright young graduates can now seek employment in many different places. This is so important for when we want to teach and encourage young people to take this subject.”

Monaghan acknowledged that one of the biggest challenges facing photonics remains its lack of recognition and the lack of understanding by both wider society and political figures. But she has been trying to counter this. 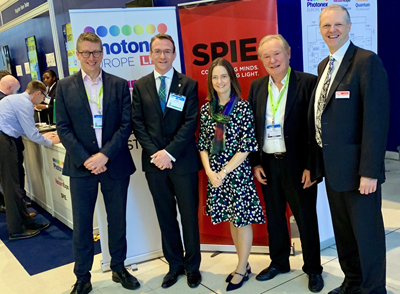 “In 2016, with the support of the Photonics Leadership Group, I established the all-party photonics group at Westminster,” she explained. “This was followed by a photonics showcase event in the House Of Commons. However, when I started this group I had to explain what photonics is to fellow MPs and I still think we have a way to go, compared with sectors like defense or even quantum technologies that people don’t really understand but somehow consider to be important.”

She noted that the UK Parliament’s Science & Technology Committee had concluded that the photonics technologies sector is responsible for significant economic growth. “Estimates are that today there are at least 70,000 people employed in at least 1500 photonics companies in the UK, with 8% growth per year over the past 30 years. These are the kind of facts and figures that make MPs sit up and take notice.”

Besides congratulating the Photonex attendees though, she had some criticisms to make, albeit with a constructive aim. She said, “The one thing I would ask you, the members of the photonics industry here today, is are you promoting this industry?”

But Monaghan did not leave it that. Another of her interests is to address the employment practices of the sector. “I like to be a little bit challenging in such events as this. An issue still facing photonics is that we have a lack of diversity in the people working in the sector, “ she said.

“I’m fed up with companies that are not recruiting from across the whole of society, especially in relation to women scientists but also considering the number of women working in the wider STEM sector. The first scientific industry visit I attended as a school student was when I was 15 years old so these outreach and engagement event have been taking place for at least 30 years."

She concluded, “I believe that there needs to be a new recruitment approach. To the industry I say, are you getting into your local schools; you need to be more proactive. Instead of choosing the first 10 males that put their hands up for a training or apprenticeship opportunity, why not start put by saying you want five males and five females.”