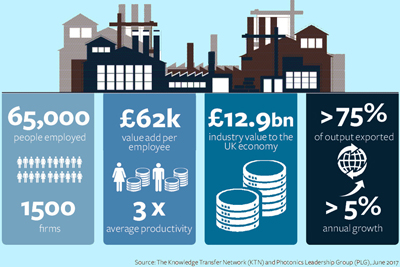 The UK's photonics industry is worth at least £12.9 billion per year.

The UK’s All-Party Parliamentary Group advocating with Government for Photonics (APPGP) emphasized the importance of the wide-ranging and innovation-driving role of light-based technologies — and the need for workforce training — at a meeting this month in London. SPIE Europe is serving as Secretariat.

The APPGP established in the meeting that in their dealings with the UK Government they will “emphasize bridging the technical skills gap as well as highlighting the enabling role of photonics in ongoing parliamentary business, such as legislation on driverless cars.”

The APPGP is working towards a sector deal in photonics which would allocate budget from the government to the field. While this would be one desirable outcome, the group is also looking to ascertain whether a horizontal sector deal covering many industries would be welcome.

The group stated that communications with the government will highlight the fact that photonics bridges and enables likely vertical submissions for funding, underscoring the technology's relevance.

At its inaugural event in February 2017, the APPGP networked MPs with representatives from Qioptiq, Leonardo Systems, Cobalt Light Systems, M-Squared Lasers, the University of Southampton, the UK Knowledge Transfer Network, and other groups who provided information about products, services, and opportunities offered by photonics.

The UK Parliament established the group in October 2016 to facilitate regular discussions with the optics and photonics community. Meeting topics are based on the UK Government's Industrial Strategy, a consultation to address long-term challenges faced by the economy.