Carol Monaghan MP, who has a degree in laser physics and optoelectronics, says exit from European Union presents major concerns for the UK’s photonics industry. 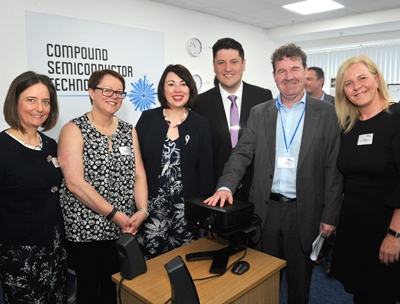 Carol Monaghan MP, the only member of the UK parliament with a degree in laser physics, has described Brexit as “one of the biggest concerns” for the domestic photonics industry – alongside a skills shortage exacerbated by uncertainty over the future status of European Union (EU) nationals working in the sector.

European collaboration critical
The Scottish National Party MP for Glasgow North West, who has represented the constituency since May 2015 and set up the All Party Parliamentary Group on Photonics to raise awareness and understanding of the industry in Westminster, continued:

“Access to the single market and to skilled and experienced staff are vital to our photonics companies. Continued collaboration with our European research partners, and continued access to the brightest and the best must be a priority in all Brexit negotiations.

“Our EU national colleagues and partners still need certainty over their current and future status and it is an utter disgrace that nearly two years after the vote to leave the European Union, we still do not have clarity on this.”

Monaghan, who was joined by fellow MP Ged Killen, and Member of the Scottish Parliament (MSP) Monica Lennon at the event, added that the development of home-grown talent was also a challenge.

“Skills in communication, investigation, evaluation and analysis are now given far greater importance [in the Scotland curriculum] and our schools are training our young people to be the confident individuals that industry requires,” said the MP, who studied at Strathclyde University, one of the UK’s leading institutions for photonics research.

Jobs enabler
Monaghan also commented on the significance of the photonics industry to the local economy in Scotland’s central belt, which includes Glasgow, Edinburgh, and the high-tech corridor between the two cities.

“Across Scotland, photonics currently provides employment for around 3000 people,” she said. “Laser sales are in excess of £200 million per annum, and 90 per cent of those sales are exports. It enables other industries to be competitive, and 10 per cent of UK jobs depend on it.”

CST Global’s CEO Neil Martin, who has overseen developments at the foundry for nearly two decades – including its 2017 acquisition by Swedish telecom components firm Sivers IMA and subsequent expansion – added his thoughts on the current momentum in the industry, with a talk entitled “The Photonics Gold Rush of 2019”.

Stressing how critical the photonics industry will be to the UK economy and GDP over the next decade, Martin outlined CST Global’s new “Technology at CST” (T@CST) initiative, and stated:

“The first meeting of T@CST will look at the key steps necessary to take quantum technologies out of the lab and into everyday life.” Sir Peter Knight, emeritus professor of quantum optics at Imperial College, London, and a member of the UK National Quantum Technologies Programme’s strategic advisory board, is set to host that meeting.