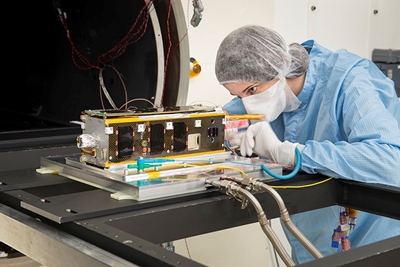 Engineers in the UK and Singapore are to collaborate on a project to build and launch a quantum-encrypted satellite link, with operations scheduled for the end of 2021.

The £10 million initiative will be based on the quantum key distribution (QKD) technique, using the CubeSat standard payload size.

Funded via the space division of the UK’s Rutherford Appleton Laboratory (RAL Space) and the National University of Singapore’s Centre for Quantum Technologies (CQT), the effort follows China’s 2016 launch of a satellite capable of QKD.

Earlier this year, the Chinese team published details of a QKD-encrypted link between Xinglong and Graz, Austria, via the Micius satellite – with the encrypted keys used to perform what they called “intercontinental quantum-secured communication”.

A critical difference between the Chinese and UK-Singapore effort is that while the Micius satellite weighs more than 600 kilos, the shoebox-sized “QKD QubeSat” ought to weigh 10 kilos at most, according to normal CubeSat standards.

Principal Investigators (PIs) for the QubeSat project are Alexander Ling from CQT and Andy Vick, head of disruptive space technologies at RAL Space. Christian Kurtsiefer, also at CQT, is listed as a co-PI on the project.

Quantum protection
With the advent of quantum computers on the horizon and the technology being widely pursued, QKD is seen as a critical technique for protecting communications in the future. Current encryption techniques based on mathematical keys will be highly susceptible to quantum computers expected to be capable of much faster decryption than today’s supercomputers.

QKD works by sending a quantum-secured key that can be used to encrypt and decrypt messages, and is typically based around light polarization and single-photon techniques. Any attempt to eavesdrop on the QKD-encrypted link would disturb it in a way that would be detectable.

However, the technology is usually limited to relatively short communications links because of the light attenuation inherent to optical fiber transmission or atmospheric scattering.

“This new joint quantum technology satellite mission opens access to a global market thought to be worth up to $15 billion over the next ten years. The collaboration aims to build on both countries’ efforts to grow the space and quantum technologies sectors by staking a claim in the emerging QKD market. The satellite will be operational in late 2021.”

The joint effort will see the RAL Space team contribute its expertise in innovative space technology and the optical links needed for sending QKD signals. In Singapore, CQT engineers and scientists will concentrate on building rugged and compact QKD instruments. 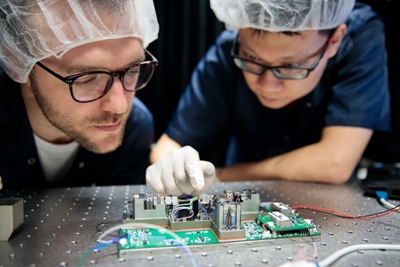 In an STFC announcement the RAL Space director Chris Mutlow said: “As the UK’s national laboratory for innovative space technology development, this is exactly the kind of mission we are here for. Alongside our international partners, we will provide a vehicle for technology readiness-raising and rapid space qualification of quantum technologies.

“This mission puts the UK ahead of our competitors in quantum communications. It will enable the space sector to tap into new manufacturing and export opportunities that will help the UK achieve its ambition of capturing a 10 per cent share of the estimated £40 billion global space market by 2030.”

George Loh, the director of programs at Singapore’s National Research Foundation (NRF), added: “Singapore has developed deep research capabilities in quantum technologies through our past investments in the CQT.

“This collaboration with the UK is significant for both countries, in bringing together our experts to demonstrate satellite-based QKD communication capability. Singapore will also bring in local companies to develop and commercialize products and services in the QKD market, as well as other forms of space and quantum technologies.”

Among those commercial partners are S-Fifteen Pte. Ltd., a company spun out from CQT specializing in QKD hardware. Major local telecommunications firm Singtel is also likely to be involved, while RAL Space says it will work closely with UK telco giant BT and the London-based startup ArQit, which is working on a QKD-protected blockchain technology.