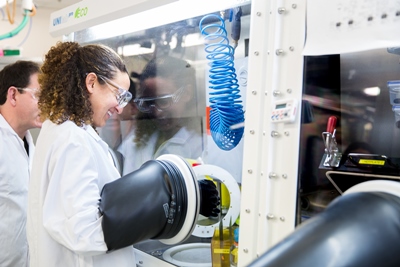 The company, which is currently working to demonstrate production of commercial-sized hybrid perovskite-silicon cells at its pilot facility in Germany, is embarking on a five-year project with the University of Oxford to develop thin-film multi-junction versions of all-perovskite devices that would dramatically extend current performance records.

Commercial focus on tandem cells
News of the project comes just a couple of months after Oxford PV set a new world-best efficiency mark of 27.3 per cent for a perovskite cell, using a tandem perovskite-silicon architecture. For comparison, the best commercial monocrystalline silicon panels available today typically offer an efficiency of around 23 per cent

Cells with higher efficiencies promise to make solar power cheaper, but that all depends on the cost and complexities of the photovoltaic materials used and the manufacturing processes required.

For example, the best multi-junction cells based on compound semiconductor materials offer 46 per cent conversion efficiency but are so complicated to produce that they are only cost-effective in space missions.

Perovskite materials, which are based on abundant chemicals and can be produced with relatively straightforward processes, promise to change all that. Discovered within the past decade, their performance has been rapidly improved by various university research groups, including Oxford’s, although commercial deployment is yet to be achieved.

According to Oxford PV’s CTO Chris Case, that’s about to change. “Oxford PV’s commercial focus remains firmly on its two-terminal perovskite-on-silicon tandem solar cell technology,” he said. “We have made significant progress in this respect. Today, commercial-sized perovskite-on-silicon tandem solar cells are in production at our pilot line and we are optimizing equipment and processes in preparation for commercial deployment.”

Licensing plan
However, Oxford PV will not transition to mass production in-house. “We plan to license our first commercial product to select silicon solar cell and module manufactures, who in turn will integrate our perovskite solar cell technology into their existing or new production lines,” the company told optics.org, adding: “We expect to have product in the field toward the end of 2019.”

But Case believes that the low-cost solar cell technology could ultimately reach conversion efficiency levels as high as 40 per cent – a performance metric that would transform energy generation on a global level by dramatically reducing the cost of renewable electricity generation, if robust versions of those cells can be made in large volumes.

The EPSRC-backed effort will aim to develop a triple-junction perovskite cell, with the three perovskite junctions each engineered with a different bandgap to absorb different wavelengths. “The new materials may have substantially different compositions and reduced lead to adjust the bandgap,” the company said, also pointing out that the presence of a small amount of lead in the perovskite structures should not prove any barrier to adoption.