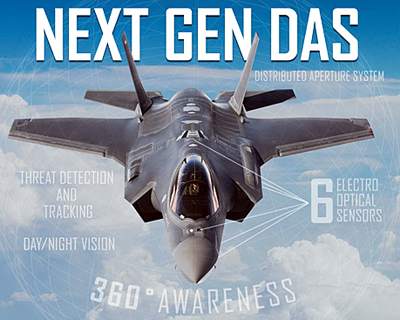 Aerospace and defense giant Lockheed Martin has selected Raytheon to develop and deliver the next-generation Distributed Aperture System for the long-awaited F-35 fighter jet. The result of a Lockheed Martin-led competition, the selection will enhance capability and reduce cost, commented the partners. Financial terms of the deal were not released

The F-35's DAS collects and sends high resolution, real-time imagery to the pilot's helmet from six infrared cameras mounted around the aircraft, allowing pilots to see the environment around them – whether day or night. With the ability to detect and track threats from any angle, the F-35 DAS gives pilots unprecedented situational awareness of the battlespace.

"We are aggressively pursuing cost reduction across the F-35 enterprise and this initiative is a clear demonstration of our unrelenting commitment to reduce costs and deliver transformational capabilities for the warfighter."

The Raytheon-built DAS will be integrated into F-35 aircraft starting with Lot 15 aircraft, expected to begin deliveries in 2023. The next generation DAS system is estimated to generate the following results compared to the current system: