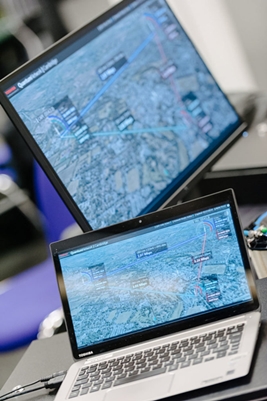 The Spanish telecommunications giant Telefónica has revealed details of a field trial using quantum encryption to protect one of its commercial optical networks, potentially paving the way to widespread deployment of the advanced photonics technology.

Telefónica’s claim of a “first of a kind” demonstration on standard network infrastructure, completed with systems technology from China’s Huawei, came as the University of Cambridge and UK Quantum Communications Hub said that they had launched the first “uncrackable” quantum network in the country.

According to Momtchil Peev, who heads up quantum communications research projects at the Huawei laboratory, the CV-QKD approach does not require the use of costly low-temperature single-photon avalanche detectors (SPADs), instead operating with “classical optical coherent communication technology”.

“Instead of addressing performance records alone we have chosen a flexible design focusing on control and key delivery interfaces, showing the feasibility of more seamless future integration into modern networks,” Peev added.

Vicente Martin, who leads the collaborating team at UPM, commented: “The ability to use new network technologies like SDN [software-defined networks], designed to increase the flexibility of the network, together with new QKD technology is what allows us to really converge quantum and classical networks on the existing optical fiber infrastructure.

“Now we have, for the first time, the capability to deploy quantum communications in an incremental way, avoiding large up-front costs, and using the same infrastructure.”

Hub developments
QKD has emerged as the likely first major example of “spooky” technology, by exploiting fundamental properties of light such as polarization and phase to create quantum “keys”. The idea is that any covert interception of such a key immediately changes its properties, rendering it useless.

The technology is being actively pursued as part of the UK’s well-funded National Quantum Technologies Programme (NQTP), and last week NQTP communications hub collaborators at the University of Cambridge said that they had launched the UK’s first “unhackable” network.

It involves a metropolitan link between the university’s electrical engineering division, its city-center Department of Engineering building, and QKD hardware provider Toshiba Research Europe. Built by the eight collaborating universities within the quantum communications “hub” funded under the NQTP and its private-sector partners, the metro network is based on optical transmission equipment provided by Germany-headquartered ADVA.

Andrew Shields, assistant director at Toshiba Research Europe, said of the development: “In the coming years, the network will be an important resource for developing new applications and use cases. Working with the quantum communications hub, Cambridge, and ADVA has allowed us to develop an interface for delivering quantum keys to applications.”

Quantum computing threat; quantum key protection
ADVA added that it has been working closely with both Toshiba and the UK technology development hub to engineer the next-generation data protection system. “Quantum cryptography is expected to be an essential tool for securing mission-critical infrastructure as it protects against all forms of cyberattack, including future advances in quantum computing,” reported the firm.

The threat posed by future developments in quantum computing - ironically one of the other key applications of quantum technology, and the major focus of one of the UK’s four development hubs - is such that current encryption techniques based on classical mathematics are expected to become useless in around a decade.

That pending threat, dubbed the “crypto-apocalypse” by leading quantum optics researcher Professor Sir Peter Knight, is providing the impetus behind much of the funding now being funnelled into quantum technology development for real-world deployment.

Quoted in an ADVA release, UK quantum communications hub director Tim Spiller, from York University, said: “Our shared goal is realizing the potential of QKD technologies to deliver secure communications. Now, alongside key partners such as ADVA, we’ve reached the stage where QKD-based security is ready for live traffic.”

Spiller added: “This is a real watershed moment for network security. A crucial factor in taking this technology from the laboratory to the real world is the ability of ADVA’s optical transport platform to interoperate with keys from multi-vendor systems. The FSP 3000 has an impressive record for protecting data in motion. Now, at a time of increasingly frequent and severe cyberattacks, it’s helping us to shape the future of network security.”

Data protection milestone
According to the firm, its wavelength division multiplexed (WDM) platform is able to use the same fiber to send both high-speed encrypted data and distribute quantum keys. Jörg-Peter Elbers, ADVA’s senior PV of advanced technology, added:

“This launch is a genuine milestone for data protection. By working with Toshiba and the quantum communications hub to advance QKD, we’re ushering in a new age of robust security.”

Also quoted by ADVA, Toshiba’s Shields said: “Developing quantum cryptography in fiber-optic networks has long been a focus for our team. Over the years, we’ve taken it from PoCs in the lab to real-world demonstrations and we were the first company to achieve a transfer rate of more than 1 Mbit/s for quantum communication.

“Now, through close collaboration with ADVA and the quantum communications hub, we’ve created a fully operational transport network secured by QKD and ready to carry live data. At a time of increasingly frequent and severe cyberattacks, this technology will prove vital to enterprises looking to fortify their data security, particularly those in the financial sector. Not only does it offer a new level of protection against intrusion on fiber-optic networks, but it also safeguards against the upcoming threat of hacking in a post-quantum world.”

• Meanwhile, ADVA says that it now achieved “world-first” 100G-speed quantum-safe transport over a long-distance optical network that does not use the QKD technique. Its demonstration of a 2800 km-long link connecting Norway with Poland is said to highlight how “future-proof” encryption can be applied to existing networks.

“What we’ve accomplished here is of enormous significance to any organization transporting large volumes of sensitive and valuable data,” claimed ADVA’s Elbers. “The appeal of post-quantum cryptography compared to QKD is that it offers a straightforward, seamless transition from current key exchange protocols.

“As a digital method, it is independent [from] the physical layer, making it easily deployable also over long-haul and multi-operator links. Both methods can, of course, be used in combination providing an even higher level of security.”