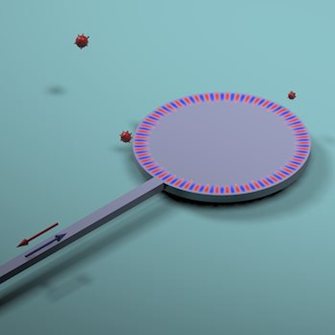 Chip-scale integrated photonic sensing systems are likely to play an important role in point-of-care (POC) biophotonics techniques, as POC devices are applied to challenging tasks such as the detection of early stage cancers.

One promising route to sensors of the necessary ultra-high sensitivity involves the use of whispering-gallery-mode (WGM) resonators, in which light circulates through the sensor cavity in a circular path.

Recent advances in nanofabrication techniques have made silicon microdisk WGM resonators increasingly feasible, to the point where the sensitivity of these sensors is approaching the requirements of cancer diagnosis. But the practical application of microdisk-based optical sensors still faces hurdles in portability, cost, and integration.

A Chinese research project led by the Harbin Institute of Technology has now developed a new approach to the coupling of light into a silicon microdisk resonator, using waveguides coupled directly onto the disks, rather than the more conventional evanescent coupling between adjacent waveguides. The work was published in Optica.

"Although there are whispering gallery mode micro-resonators that can already be used to resolve single molecules, their application is limited by problems in device repeatability, stability and wavelength range," said Qinghai Song of Harbin Institute of Technology.

"Our new design enables excellent device performance and works for a variety of wavelengths, with low cost, higher stability and better device repeatability."

The project's design employed a 5-micron radius silicon microdisk connected at its edge to a radial silicon waveguide. Using this "end-fire" injection from the waveguide into the disk removes non-linear and time-dependent parameters from the coupling operation, according to the team, and ensures that injection of light into the disk remains efficient.

Ready for commercial applications
In its published paper, the team noted that introducing light at a carefully controlled angle via the waveguide can produce a phenomenon loosely termed laser time-reversal, in which an optical system supports only an incoming radiation pattern rather than suffering losses by emission. This approach essentially exploits constructive interference between the incident light and the disk's resonant modes as a means to actively improve the coupling coefficient.

In tests, the new device demonstrated a coupling efficiency of 57 percent, said to be on a par with, or better than, conventional architectures. However, the new approach should lend itself more readily to the manufacture of cost-effective optical devices than current designs do.

The project found that sensors incorporating microdisks and end-fire injection could detect the presence of multiple large nanoparticles, and also single nanoparticles as small as 30 nanometers. Cellular structures on this scale are thought to be significant in the progression of cancers, so the team's primary goal is a portable and low-cost sensor able to detect changes in cells that are early indicators of the disease. Uses of similar integrated photonic circuits in communication and security are likely to follow.

"Performance of the end-fire injection technique is comparable to that of conventional microdisks, but because this configuration does not require any parts that are smaller than 500 nanometers, it can be fabricated with low-cost techniques for reduced cost and improved robustness," said Song. "Overall, our findings show that microdisks are now ready for commercial applications."