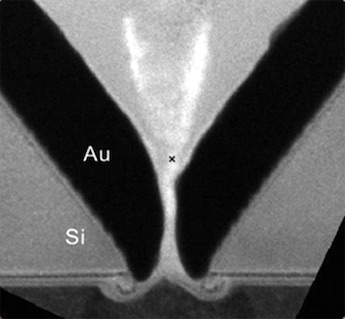 One promising approach to DNA sequencing involves the use of nanopores, exploiting the interactions that can take place between molecules that are mechanically confined within the pore and an ionic current passing through it. Under the right circumstances, individual nucleobases can be distinguished using the amplitude variations observed in the current.

A team at imec has now developed a technique that brings this principle into the optical domain, by combining surface-enhanced Raman spectroscopy (SERS) with nanopore fluidics. The goal is to address some of the fundamental challenges still posed by DNA sensing and sequencing, although applications in other fields could also follow. The work was published in Nature Communications.

The imec method involves using nanofluidics to drive DNA strands through elongated plasmonic nanoslits, rather than pores, and generating a SERS signal from those molecules—a signal enhanced both by a gold coating on top of the nanoslit and the engineered shape of the slit itself.

In trials, the project demonstrated that the SERS signal could act as a direct fingerprint for four nucleobases, indicating that the plasmonic nanoslit SERS approach is capable of single-molecule sensitivity and sub-nanometer spatial resolution in real time.

"Nanoslit SERS is an entirely new concept, exclusively designed for sequencing purposes when we launched this project a decade ago," imec's Chang Chen told optics.org. "I was the first in the world to look into the topic of combining SERS with nanopore fluidics for single-molecule sensing towards genome sequencing, and our latest achievement of single-molecule and on-site DNA-strand identification is the most important milestone to date for the project."

SERS for sensing and feedback
Although other research groups have investigated the use of plasmonic apertures with SERS, none of them has been as successful, according to Chen, who believes that imec's focus on single-molecule sensing and CMOS compatibility has played a significant part in its success.

Extending the technique further towards individual nucleic acid sequencing will involve some significant challenges, and the project is now collaborating with another group on applying ultrafast Raman spectroscopy to the task, perhaps allowing the motion of DNA itself inside the slit to be monitoried. However, Chen believes that several other potential applications may now benefit from the new platform too.

Similar molecular identification operations using the nanoslit's Raman capabilities could be used for other molecules, such as RNA or proteins, but should also be suitable for chemical sensing or the monitoring of chemical reactions and catalysis. "Nanoslit SERS allows us to separate two regents and analyze their temporal reaction happening inside the slit," said Chen. "This would let us study single-molecule reactions for catalysis, synthesis or photochemistry."

A second useful feature is the nanoslit's suitability for electrochemistry, with the high electric field and locally induced potential generated inside the pore perhaps allowing the study of surface affinity and other fundamental phenomena.

The surface plasmon characteristics of the technique are also of interest, and may facilitate the study of important topics in plasmonics, including the enhanced optical behavior termed extraordinary optical transmission (EOT), and the energetic particles called hot electrons.

A further possibility, related specifically to the asymmetric nanoslit-cavity that imec has developed, would be its use for enhancing osmotic power generation and water desalination. Osmotic power systems exploit the difference in salt concentration between seawater and river water, engineering an osmosis process through suitable membranes and using it to drive the generation of electricity.

"Our breakthrough may attract attention from these emerging fields of energy and water resource too," commented Chen. "In all these applications, nanoslit SERS can serve as the readout for sensing or for feedback."