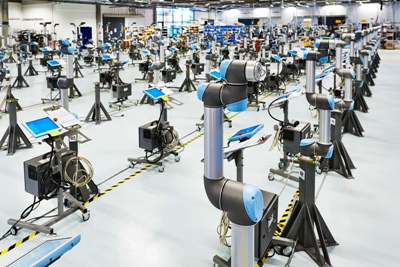 We are the robots

Robotic Vision Technologies (RVT), which has developed software aimed at machine vision applications, says it has raised $10.5 million in a new funding round.

Described by the Maryland-based firm as a mix of CEO, director, and technology fund backing, the money will be used to advance RVT from its current focus on research and development, and towards industrial deployments in the fast-growing machine vision sector.

Patent pipeline
Though it only specifies one source of its funding – the US financial advisory company Edelman Financial Services – RVT states that it has raised cash from private investors based in Silicon Valley, northern Virginia, Canada, and Germany.

Company founder and CEO Rick Weidinger said: “Our focus has been to perfect our quality and product line prior to any major marketing effort.” With early implementations in place and 20 patents in the pipeline, he adds that “now is the time” to build sales channels for its three-dimensional vision guidance software.

“Major automotive and other manufacturers are already using RVT’s new technology in their factories, and more are applying upgraded RVT software into their production lines now,” claims the firm.

The software is said to build 3D models of parts automatically from a single two-dimensional camera image, so that they can be found with “pin-point” accuracy.

To do that, the RVT software looks for features including edges and markings, to create known points on the object. Using a patented algorithm, it is said to require no specialized imaging hardware, just off-the-shelf cameras – thereby reducing dramatically the cost of deploying a vision-equipped industrial robot.

RVT works closely with the Danish company Universal Robots, while back in 2014 it signed a strategic partnership with Intellectual Ventures – a move intended to expand sales beyond the US.

Another industrial partner is Jacobs Technology, part of the giant defense and aerospace engineering company, while car companies including Toyota, Ford, and General Motors are all said to have used RVT products.

Growth market
Investor Ric Edelman, the financial advisor who set up the eponymous financial services company, was quoted in the RVT release saying that machine vision would become “one of the most disruptive forces in all areas of manufacturing and transportation” over the next decade.

“RVT and its technology are poised to transform the way robots function in multiple markets,” he added. “Their innovations in how machines perceive and respond to their environments are exactly what customers are looking for as they develop the next generation of equipment and end-user products.”

RVT will be one of the companies exhibiting at the forthcoming AIA Vision show, which takes place in Boston early next month.

Another of the exhibitors is CCS America, which is set to launch and demonstrate a new, open-architecture illumination system aimed at applications in computational imaging. The demonstration will show how the depth of field of such a system can be extended by using a liquid lens controller.

AIA is said to be the world’s largest trade association for machine vision, and reported last month that the size of the North American market for machine vision technology had grown nearly 15 per cent in 2017, to reach $2.63 billion.

That total comprised $2.26 billion in machine vision systems, complemented by some $359 million in related components, including optics and illumination sources.

“The market began the year in the first quarter [of 2017] with $596.5 million in total [machine vision] financial transactions, increased in the second quarter to $644.9 million, and reached an all-time high of $696.4 million in the third quarter,” noted the organization.