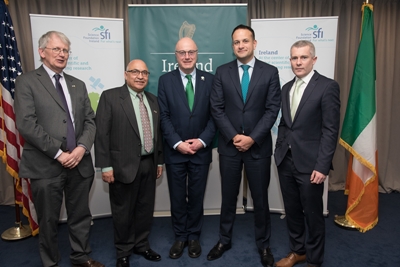 Rockley Photonics, the venture-backed startup working on silicon photonics transceivers, is setting up a new research and development center at the Tyndall National Institute in Cork, Ireland.

The move, which follows last week’s news that Rockley had raised a further $40 million, is a collaboration with the Irish Photonics Integration Centre (IPIC) – and was announced by the Irish Taoiseach, Leo Varadkar, at a Science Foundation Ireland (SFI) event in Washington, DC.

The aim of the three-year collaboration with IPIC is to “advance silicon photonics from the lab to market”, addressing the growing demand for faster and more energy efficient data communications in data centers.

Collaborations
At the SFI event in Washington, DC, timed to coincide with St Patrick’s Day and including a variety of similar announcements, Varadkar said: “This investment showcases the growing scientific and industrial collaborations between the US and Ireland.

“By establishing partnerships with innovative companies such as Rockley Photonics, Ireland continues to grow its competitiveness in the area of ICT. Forging such strategic partnerships will help to facilitate the development of breakthrough technologies which have the potential to deliver huge societal and economic benefits.”

Rockley, which unlike others in the silicon photonics space is working on relatively large-scale devices, already has close links with the UK’s Photonics Hub, spread across Southampton and Sheffield universities.

And earlier this year its CEO and founder Andrew Rickman agreed a $42 million manufacturing deal with China-based Hengtong Optic-Electric that should see the company’s first commercial 100 Gb/s transceiver products appear later this year.

Rickman, who also founded Bookham Technology and was a key investor and chairman at silicon photonics specialist Kotura, said in a release from Rockley and Tyndall that his latest venture’s take on silicon photonics was designed to address challenges facing next-generation data centers, through which much of the internet’s spiralling traffic – and energy consumption – is routed.

“Network architects [will be able to] to take advantage of new high-density, low-power connectivity solutions and explore new network topologies and equipment design,” he commented.

“This investment with IPIC will enable us to combine our expertise and utilize Tyndall’s state-of-the-art facilities to develop ground breaking early stage technologies, which will not only have a huge impact on the future architecture design of large data centers, but will also improve the power and computational capacity of new consumer devices and provide robust sensing solutions in the autonomous vehicles and consumer device sectors as well as others.”

Market expectations
Tyndall has long-standing expertise in both conventional and silicon photonics technologies, and is already involved in development consortia with semiconductor industry giants IBM and Intel. It is also home to the European Commission backed “PIXAPP” pilot line effort, which is focused on photonic integrated circuit (PIC) packaging – regarded as a key bottleneck in PIC and silicon photonics technology development.

IPIC’s director Paul Townsend, also the head of photonics at Tyndall, added: “The investment will not only advance IPIC’s optical modulator and photonics integration technologies into products designed for volume production, but will also strongly position both IPIC and Rockley to take competitive advantage in the datacoms market.”

According to Townsend that market should be worth $6.4 billion by 2023, while France-based industry analyst Yole Développement said earlier this week that it considers the silicon photonics sector to be “at the very beginning of a massive deployment”.

Yole, which collaborated with former Kotura CEO Jean-Louis Malinge on its latest report, concluded that the market for silicon photonics chips would be worth $560 million in 2025 – but that silicon photonics transceivers would by then command a sector worth nearly $4 billion.

“The tipping point of the silicon photonics industry is only at the very beginning, since there is massive, ongoing global development geared towards further integration,” Yole’s analyst team believes, highlighting collaborations between the Taiwanese foundry giant TSMC and Luxtera, and between US-based GlobalFoundries and Ayar Labs, as evidence of the technology's maturation.

It comes as developers of both silicon and more conventional photonics technologies gathered in San Diego for the annual Optical Fiber Communication (OFC) conference and show. This year key vendors including Finisar and Lumentum have showcased 400 Gb/s technologies for both datacom and telecom applications.