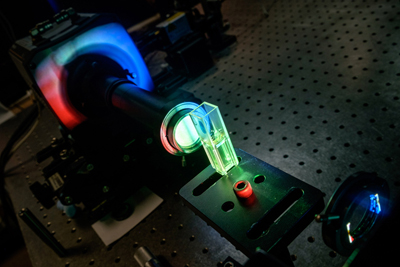 The development team has recently been in talks with pharmaceutical, food and beverage companies, which have shown "keen interest" in adapting the research for quality control and food safety, NTU stated.

Using only a piece of ground glass and a monochrome sensor, the scientists have created multi-coloured images by reverse engineering the light that is scattered by the translucent matt surface of the ground glass, thus obtaining the original image that was projected on to it.

Since different wavelengths of light are scattered differently by he ground glass, the scientists created an algorithm to reconstruct the image. To do this they created a library of speckle patterns linked to each wavelength of light, including those in the infrared and ultraviolet spectra.

In a conventional camera, optics made from glass or plastic lenses capture light and guide it onto the colour filters and camera sensor to obtain sharp colour images. These lenses are relatively bulky in size and expensive due to the precision manufacturing required. NTU comments that by removing the need for a lens and colour filters and replacing them with ground glass, this innovation could potentially be applied to compact cameras and smart phones to make them slimmer.

Assistant Professor Steve Cuong Dang from the NTU School of Electrical and Electronic Engineering, who led the research, said their new imaging technique could help to improve imaging applications in biomedical and scientific applications as well as opening new doors for other industries.

“Our technology can also reconstruct images in other multiple wavelengths invisible to the naked eye, like infrared and ultraviolet, which are used in imaging purposes for medicine, surveillance and astrophysics. It can also reconstruct images taken at the microscopic scale,” explained Prof Dang. “Our multispectral imaging technique uses a monochromic camera coupled with a simple piece of ground glass, making it very cost-effective compared to existing multispectral cameras on the market.

“Our camera can capture any range of light spectrum, unlike existing cameras on the market which are pre-fixed. It is also less affected by optical alignment issues like conventional cameras, because there are no moving parts and no focusing optics.” 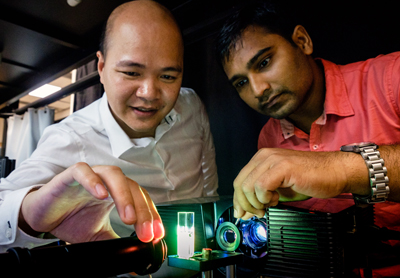 Professor Yoon Soon Fatt, Chair of NTU’s School of Electrical and Electronic Engineering said this innovation was the result of interdisciplinary research involving both physics and photonics engineering.

“How light interacts with objects change with varying wavelengths, so our scientists had to think out of the box, in order to design a camera not limited by the typical red, green and blue spectrums. This research is an example of how advanced photonics research can lead to potential improvements to diagnostics, sensing and surveillance technologies.” said Prof Yoon.

“There are other potential areas of application where our technique could be useful. For instance, it could be used for food safety, where one can take a photo of fruit or meat in particular spectra to look for spots associated with chemicals or bacterial activity leading to spoilage,” said Dr Sahoo, who is the first author of the paper.

The research team used their technique to distinguish between two different apple juices which look identical to the naked eye, but have different colour spectrums signalling their difference in ingredient or freshness, for instance.

It could also be used for forensics, as the camera could be tuned to capture a wide spectrum, including near infrared and ultraviolet, to reveal clues or evidence invisible under normal circumstances. With only a snapshot picture and a computational algorithm, this multispectral imaging technique combines the strengths of vision technology and spectroscopy to do multiple analysis at very high speeds.

A patent has been filed for this new technology by NTU’s innovation and enterprise arm, NTUitive, and the research team will be engaging industry partners to see how they can adapt their technology for real-world applications.

Supported by NTUitive and the LUX Photonics Consortium, the team received keen interest from industry players and potential adopters to further develop this technology in the fields of vision correction and chemical sensing. This innovation, which was featured on the cover of the scientific journal Optica at the end of 2017, was last week presented at a press conference in Singapore. Further details and presentation is available on the NTU website.