Annual gathering of Europe’s representative group gets to work on strategic priorities for 2021-2027. 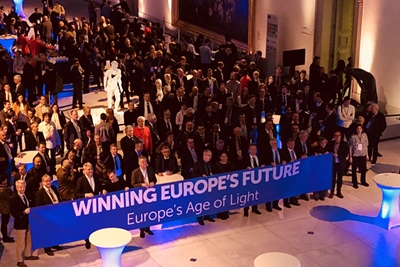 Europe’s Horizon 2020 innovation program still has nearly three years to run – and has already funded more than 1100 photonics-related projects – but last week saw the Photonics21 representative group turn its focus squarely on the future and its priorities for the next budget period. Covering 2012-2027, currently it is known simply as “Framework Programme 9” (FP9).

Much is still uncertain. What will be the overall FP9 budget, and how will the program be structured? Will the public-private partnership (PPP) model, which has seemed to suit the photonics sector well, be retained? How, if at all, might the UK be involved in a post-Brexit landscape?

With Bernd Schulte deputising for flu-ridden Photonics21 president Aldo Kamper at the Brussels meeting, the 200-strong attendance heard from senior European Commission (EC) representatives ahead of getting to work on those future strategies within their application- and technology-focused workgroups.

Budget and Brexit
Things should start to become clearer from early May, when the EC is due to reveal its proposed budget for FP9. The “price tag”, as Carl Buhr, deputy head of cabinet within the “digital economy and society” commission run by Mariya Gabriel, described it to the Photonics21 gathering. A month later, there will be further details on the proposed architecture of the FP9 scheme.

“And that’s when the politics begins,” said Buhr, adding that the European Parliament and European Council would seek evidence that the €77 billion-or-so spent on Horizon 2020 has delivered tangible results benefiting the European Union.

“That is when we need proof that that the PPP has worked,” Buhr noted, before also telling the Photonics21 meeting that there would be a need to champion the photonics PPP, and to detail “success stories” that demonstrate wider societal benefits beyond mere technological progress.

Inevitably, the implications and politics of Brexit loom large over those impending discussions. According to the FP9 “position paper” just published by the UK government’s Department for Business, Energy and Industrial Strategy (BEIS), the UK is keen to participate in FP9, and most within the photonics and wider science and technology community across Europe feel it is inconceivable that such a deal will not be brokered. But recent history tells us not to assume the unthinkable won’t happen.

Funding competition
There is further uncertainty in terms of the structure of FP9. While Buhr has previous experience of the photonics sector, making her first appearance at the Photonics21 annual meeting was Lucilla Sioli, who became the latest director of the EC's “DG CONNECT” digital industry division as recently as January.

One of Sioli’s key messages was the importance of improving communication to decision makers, including not just the budget-holders within the EC like her, but members of the European Parliament and the European Council.

The good news from a photonics point of view appears to be that its PPP is well regarded by the Brussels bureaucrats; Sioli described it as “one of the best and most efficient” to have been funded under Horizon 2020.

The potentially less good news is that with emerging cross-cutting technologies such as artificial intelligence (AI) now rising up the research agenda, competition for slices of the research-funding pie under FP9 is growing.

It means the number of official key enabling technologies (KETs) will grow from the six identified in 2009 (and which received a total €6.6 billion under Horizon 2020), with the likely addition of AI and digital security for the updated “KETS 4.0” version. One possible outcome is that photonics will find itself merged with microelectronics in the new FP9 architecture, whether that’s in the form of a PPP or otherwise.

That said, the FP9 budget could be considerably larger than that of Horizon 2020. In January, the European Parliament’s budgets committee called for spending of at least €120 billion in FP9, to “secure Europe’s global competitiveness, scientific and industrial leadership, [and] for responding to societal challenges”. 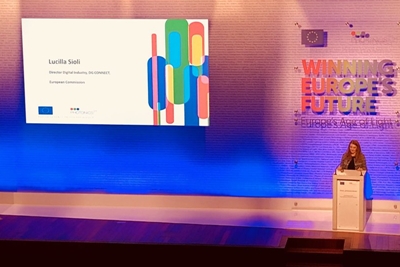 Mission control
One significant change is likely to be the adoption of an innovation program more obviously structured around “missions” relating to societal and industrial challenges. The recent “Re-finding Industry” report, penned by the EC’s High-Level Strategy Group on Industrial Technologies, points to this with an entire section devoted to “mission-oriented policy”.

“To help create inclusive growth and new jobs, industrial policy needs to be built around missions that fully encompass KETs,” notes that report, adding that the societal effects of innovation must be closely monitored, and that wider society plays an active role.

“Missions should be defined not in terms of impact but in terms of a viable solution that can be applied and replicated,” states the report, listing examples like “clean, safe mobility” and “energy independence - affordable renewables” where photonics technologies would be likely to play a key role.

That mission-focused sentiment is echoed in the UK’s position paper, which like the EC’s industrial technologies report takes much of its lead from the recommendations of the Lamy Group report on maximizing the impact of Europe’s research and innovation efforts.

The Lamy report recommends doubling the post-2020 budget for European research and innovation, and adopting a “mission-oriented, impact-focused” approach, alongside a rationalization of the European funding landscape, by reducing the current number of funding schemes and instruments.

While it doesn’t mention Brexit specifically, the BEIS paper calls for global collaborations, and concludes with a message that the UK “intends to actively engage in the development of [FP9], including discussing possible options for our future participation”.

That BEIS paper also recommends retaining the “three pillars” structure of Horizon 2020, but appears to contrast the success of the first, “excellent science” pillar with the achievements of the industrial strategy effort thus far. “Across [FP9] it will be important to retain the balance between bottom-up, researcher-driven activities and more top-down, challenge-driven programmes,” it states.

VR/AR and optics
At the Photonics21 annual meeting in Brussels, there was plenty of emphasis on the fast-emerging fields of augmented and virtual reality (AR/VR), the spectrum of individual technologies that fall under the AR/VR umbrella, and the specific roles that optics technology play within them.

Setting the scene ahead of a day in which the various Photonics21 workgroups hammered out their own FP9 priorities, keynote talks by Jean-François Hebert from Dassault Systèmes and Michael Totzeck representing Carl Zeiss and Konstanz University each suggested that this particular mission would likely be a strong focus in the coming decade.

Totzeck highlighted just how far AR technology still needs to progress before it can deliver the kind of seamless, collective mixed-reality experience that has been hinted at by the likes of Magic Leap (see video below). Simply put, the optics needed to both capture and reproduce the real world in a virtual environment, in a truly portable form factor, do not yet exist.

One of the key challenges is to deliver a wide field of view without resorting to the kind of heavy, large-format optics typically seen in high-end cameras. Flat optics and metamaterials offer some promise here, but are still a long way from the level of maturity required for consumer applications.

Noting that analyst firm Gartner currently has AR technology stuck in the “trough of disillusionment” on its famed hype cycle, Totzeck said that the journey towards Magic Leap’s vision has “just begun”, and that cross-cutting co-operations like Zeiss’ own hook-up with Deutsche Telekom would be critical for success.

*That* Magic Leap video: optics suitable for actually reproducing a seamless virtual experience could be one of the "mission" focuses for photonics in Europe's FP9 funding period