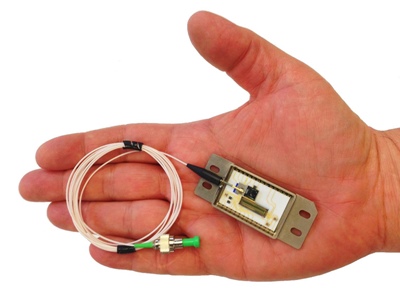 ACTPHAST, the European Commission-funded photonics technology incubator hosted by Vrije Universiteit Brussel (VUB), says that €10 million in support secured via the Horizon 2020 program will create 750 new jobs over the next four years.

The program, co-ordinated by VUB’s Hugo Thienpont, is aimed mostly at SMEs, helping them to develop photonics-related products by providing support in the form of prototyping expertise and business coaching to aid commercialization efforts.

Rapid prototyping
Now known as “ACTPHAST 4.0”, the follow-up effort is designed to build on the first iteration of ACTPHAST, which was funded under the EC’s earlier Framework Programme 7 (FP7) innovation scheme.

The current effort officially began in November 2017, following on directly from the end of the original project. ACTPHAST 4.0 looks to have more emphasis on rapid prototyping of product concepts that have already been developed, as well as business and market planning. Thienpont said:

“The coaching support services for SMEs we offer are a vital complementary action running alongside the deep innovation interventions. We make sure that the companies are fully ‘primed’ before, during and after they engage with ACTPHAST 4.0 on innovation projects related to their product so they can accelerate on all fronts towards commercial success.”

Paul Doyle, the project’s central outreach co-ordinator, added: “The majority of SMEs today do not have access to experts in the business and technical aspects of innovating with photonics [who] can work with them continuously to incubate their particular innovation.

“The highly skilled people that support the execution of the innovation with the most advanced photonics technology platforms are often out of reach to a small business. SMEs may not be able to take the financial risk to recruit these experts or invest in diverse technological facilities that are crucial in photonics-driven innovation processes.”

Pan-European partnerships
ACTPHAST 4.0 aims to make that kind of expertise available in a subsidized format to any European company – with a particular emphasis on SMEs – to collaborate on photonics innovation projects expected to have a substantial impact on the companies’ business growth in terms of new revenues and job creation.

The predecessor effort is claimed to have helped create more than 700 jobs over its four-year course, in which it supported more than 100 different companies. Now the aim is to go further, by creating another 750 jobs.

Partnerships have been established across Europe, for example with the Greek company B&T Composites. It is now working on the development of optical fiber sensors for in situ process monitoring of composite materials.

Another partner in the photonics space is the UK-based holographic display developer Holoxica, whose CEO and founder Javid Khan said: “ACTPHAST provided us with expertise in the development of our key component, which is a holographic optical element. We needed support and ways to develop our next-generation display. ACTPHAST enabled us through their network to access this technology.”

The program also looks to help companies unfamiliar with photonics, and who would not normally use such technologies in their products or processes. One example of that is a partnership with the Norwegian firm Tomra, which specializes in sorting equipment. Under ACTPHAST, it evaluated new types of collimation lenses for in-line inspection applications.

Another is the cycling equipment firm Lazer Sports, which worked on a high-end helmet featuring a visor-mounted transparent display – a project that drew on expertise from both VUB and the Belgium-based electronics research and development center IMEC.

Pilot lines
ACTPHAST also maintains close relationships with the various photonics-related pilot manufacturing lines that have been set up with European funding. Those include the “PI-SCALE” line for flexible organic LED production, the “PIX4LIFE” line for chip-based biophotonics, and the “MIRPHAB” effort dedicated to mid-infrared sensors.

The ACTPHAST team is also closely involved with Photonics21 and Europe's photonics public-private partnership (PPP). A recent report from Photonics21 predicted that photonics technology would create as many as one million new jobs by 2030, as well as a "fully digital value chain" yielding new forms of customization and collaboration with industrial processes.

Those and related themes are set for discussion at this week's Photonics21 annual meeting, where the focus is likely to be on Industry 4.0 and priorities for the post-Horizon 2020 funding period that will fall under the "Framework Programme 9" budget period starting in 2021.

• For further details about ACTPHAST 4.0 and its various services, visit the incubator program’s dedicated web site.