Pre-revenue photonics companies have until November 13 to enter competition that will climax at Photonics West in February. 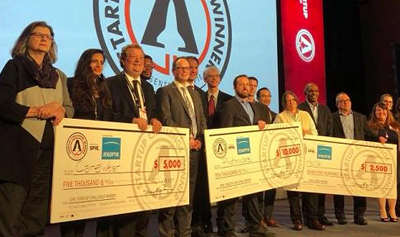 StartUpChallenge winners and judges at Photonics West, in February 2018.

Another year, another SPIE Startup Challenge and another great chance for photonics entrepreneurs to present their innovations and business ideas, to meet industry experts and potentially win a share of more than $85,000 in cash, prizes, support and, even more importantly, an unmissable networking opportunity.

Aspiring entrepreneurs now have until 13 November to apply for an opportunity pitch their light-based technology product ideas to a team of business development experts and venture capitalists in the SPIE Startup Challenge 2019.

Organized by SPIE, the international society for optics and photonics (and publisher of optics.org), the semi-final and final rounds of the competition are held during SPIE Photonics West at the Moscone Center in San Francisco, California, which next year runs from 2-7 February. Application form and other information is on the SPIE website.

The first-placed winner will receive a cash prize of $10,000 provided by Startup founding partner Jenoptik and $5,000 in products from lead sponsor Edmund Optics. Jenoptik also provides $5,000 for second place and $2,500 for third place. 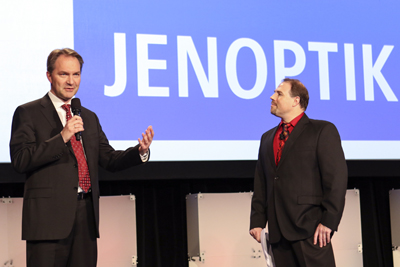 Dirk Fabian, SPIE’s Community Lead, and well-known presenter of previous Startup pitch-and-judging sessions, explained, “The Startup Challenge provides a way for both rookie and veteran entrepreneurs with young photonics companies to maximize their learning, networking, and marketing with the photonics business community.

“Most new companies don’t have the resources they need to spend on marketing and customer discovery, but this is where being at Photonics West adds tremendous power to the Startup Challenge experience. So dive in! Whether you are still figuring out whether you should jump off the board, or are already in the air, headed rapidly towards the water, we do our best to help everyone in the program stick the landing.”

Looking back over the competition’s rich history, Fabian added, “After eight years, some trends are obvious. A biophotonics-oriented company has won the Startup Challenge every year except one, when 8tree won with an imaging system for fuselage inspection. OCT systems have been popular, pointing to the tremendous benefits from that technology, but the creativity of the entrepreneurs and effectiveness of optics to solve valuable problems never ceases to surprise me.”

The big change for the next (2019) edition of Startup Challenge is that all of the events will take place in the Moscone Center, San Francisco, as part of the main Photonics West industry program. This means that attendees can watch the semifinals more easily in the topic areas that match their interests, whether: Biophotonics and Point of Care Diagnostics; Imaging, Displays, Lasers, Semiconductors; or Sensors, Wearables and IoT.

In 2018’s Startup Challenge, PhotoniCare, a spinout of the University of Illinois at Urbana-Champaign (UIUC), which developed a handheld, low-cost imaging platform for medical applications such as inspecting the eardrum, was named the winner. Its ClearViewT, the first product on the Photonicare platform is described as “being able to fundamentally change the way physicians manage middle ear infections, one of the most common diseases in the world”. Other startups CareWear and Orbis took second and third places.

Since February 2018, this year’s Startup Challenge winner PhotoniCare has announced several success stories on its website, including MedTech Innovator selecting PhotoniCare for its 2018 Showcase and Accelerator; PhotoniCare receiving a $2.1 million National Institute of Health Phase Small Business Innovation Research Award; and the company being honored at the 2018 Angel Capital Association Summit.