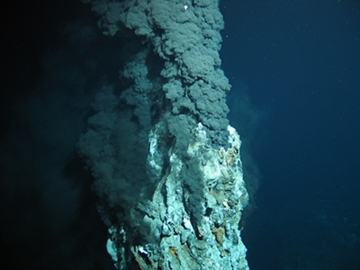 Laser-induced breakdown spectroscopy (LIBS) has proved capable of identifying zinc minerals at a pressure of 600 bars – meaning that the analytical technique looks suitable for future use on board an autonomous deep-sea rover.

Engineers at Laser Zentrum Hannover (LZH) have been working on the approach as part of a wider Horizon 2020 project to develop a robotic underwater vehicle that can map the ocean floor for valuable mineral deposits.

Called “ROBUST” (short for Robotic Sub-sea Exploration Technologies), the €6 million project started nearly three years ago and is scheduled to run until early 2020. It is co-ordinated by the UK materials specialist TWI, with Hannover-based pulsed laser company and LZH spin-off Neolase among the list of industrial partners.

Mineral mapping
The intention is to aid the mining industry by providing a way to map and quantify minerals on the ocean floor, but without disturbing and endangering the marine environment.

LIBS provides a non-contact, and non-destructive way to chemically analyze rocks and minerals. A pulsed laser generates a small area of plasma when it is fired at the rock, with spectroscopic analysis of the light in the plasma yielding information about the chemical elements present.

The technique has already proved its utility in harsh environments – not least the surface of Mars, where the Curiosity rover’s “ChemCam” instrument has used LIBS to analyze Martian rocks.

Earlier this year, LZH said it had built a dedicated pressure chamber to mimic the deep-sea environment. Now the organization says that, for the first time, its team has successfully measured zinc samples with LIBS at the 600 bar pressure level.

“The chamber is suitable for both freshwater and saltwater and can thus simulate various application scenarios,” says LZH. “Through a viewing window, the laser radiation enters the pressure chamber with the test sample to be analyzed.”

The latest experiments show clear detection of two out of three zinc emission lines in the blue-green spectral region when the pressure is raised to 600 bar (see spectral image, below), although both lines are significantly broadened, while the signal from the shortest-wavelength emission appears barley perceptible.

That pressure, equivalent to a depth of 6000 meters, has been identified as the maximum target depth because of the commercial application requirements of interest, including identification of ferromanganese crusts and nodules, and sites abundant in sulphides. 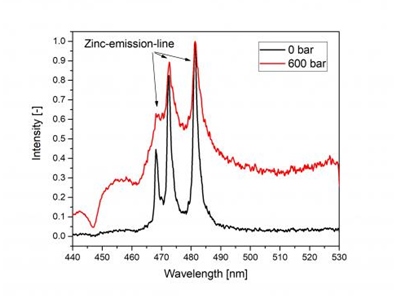 Sub-sea services plan
One of the key objectives of the Horizon 2020 project was to develop a compact diode-pumped solid-state laser in a pressure housing that can then be incorporated within the LIBS probing head.

Other key milestones include developing hovering and control capabilities for the autonomous underwater vehicle (AUV) carrying the LIBS kit, ahead of deep-sea deployment. The 6 km maximum target depth would be sufficient for mapping virtually the entire sea bed thought to be of interest for mineral deposits.

As well as completing the hardware development aspects, the ROBUST team is aiming to produce a life-cycle cost plan for explaining how the LIBS-enabled UAV could reduce exploration costs, and a business plan for offering sub-sea services based on the technology.

“The ROBUST consortium aims to develop a fully automated procedure, where the AUV dives in the pre-determined site and through advanced 3D mapping and identification of the sea bed spots targets for LIBS scanning maneuvers and initiates the scan autonomously,” states the project web site.

“Sustainable exploitation of marine resources will be aided through LIBS by supporting highly focused mining activities, thus having less environmental impact,” it adds, also offering the scope for improved scientific understanding of the deep-sea environment.