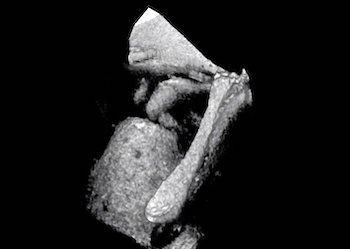 An imaging technique able to visualize the sound-induced vibrations traveling through the middle ear could offer new information about how the ear processes sound waves, and assist clinicians treating hearing loss.

The imaging tool, termed OCT vibrography, provides motion pictures of the three small bones in the ear called the ossicular chain, and shows how their movement varies with sound frequency. The work was published in Biomedical Optics Express.

"There are multiple theories of how high-frequency sounds are conducted to the inner ear, and the ability to view the sound-driven motion of large portions of the ossicular chain will help us understand what actually happens," commented project leader Seok-Hyun Yun of the Wellman Center for Photomedicine at Massachusetts General Hospital.

OCT vibrography, first developed at the Wellman Center in 2012, is designed to allow reconstructed volumetric snapshots of rapidly moving samples, based on the synchronized acquisition of OCT data related to the vibration of the sample under external stimulus.

In its published paper, the project team commented that previous demonstrations of OCT-based middle ear vibrometry have been largely focused on measuring the vibration magnitudes involved, while the vibration phase has been generally overlooked.

"Accurate measurements of the relative phase of motion along the ossicular chain can help determine modes of motion, and identify differences between normal and pathologic states," noted the team.

The modified OCT vibrography method was tested on the ears of chinchilla cadavers, a common animal model for the study of ears similar in size and sensitivity to those of humans. An OCT measurement system was synchronized with sound from a high-fidelity speaker, so that movement of the middle ear bones caused by the sound was imaged by OCT. Algorithms then extracted accurate measurements of the vibration from the OCT images.

Having investigated the vibrational snapshots and phase delays of the manubrium, incus, and stapes bones over 100 Hz to 15 kHz, the team's vibrography images also revealed a previously undescribed mode of motion present at higher frequencies, involving twisting and bending of the ossicular structure at stimulation above 10 kHz.

At present the OCT vibrography technique requires 60 seconds to acquire the measurements needed, a period during which the breathing and heartbeat of a live animal would lead to unwanted artifacts in the data. Further research will now explore whether measurements of motion at multiple points, combined with an anatomical OCT scan of the whole eardrum and middle ear, may provide enough information to diagnose ear disease in living organisms.

"Our demonstration of a unique mode of ossicular motion at high frequencies has already led to new ideas of how the bones conduct sound to the inner ear,” said Antoine Ramier of the Wellman Center. "That information may help define new ways for surgeons to reconstruct diseased ears."