SPIE Optics+Photonics: LSST on a roll to first light 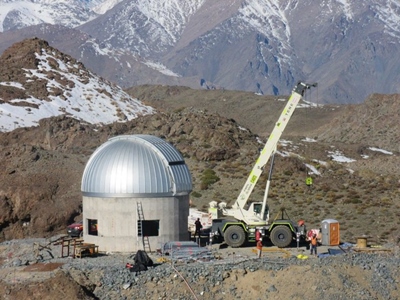 by Ford Burkhart in San Diego
In Chile, in France and all across the US, the various elements of the Large Synoptic Survey Telescope (LSST) observatory, mankind’s biggest ever astronomy venture, are now rolling smoothly toward “first light”.

“There have been no insurmountable problems,” said its director, Steve Kahn, in an SPIE Optics+Photonics conference plenary session dedicated to optical engineering in San Diego, adding, “We remain on track.”

Kahn’s address came just days after LSST engineers lifted the dome covering the observatory's smaller auxiliary telescope into position (see image). That followed installation of a key piece of equipment, the camera data acquisition system, last month. Originally, the telescope had been due to begin operations in 2014, before those plans slipped and private backers - including Bill Gates - stepped in with personal funding to help get LSST back on track.

3.2 gigapixel camera
Kahn showed a photo of LSST taken last month at the summit of Cerro Pachón, with the telescope ready to handle an 80-ton lift of equipment.

At the heart of the observatory will be the LSST’s giant camera. Based around a 3.2 gigapixel array comprising 189 4K x 4K CCD sensors, it will begin to be integrated over the next few months, Kahn said.

The full camera is scheduled for completion in early 2020. “We have about 38 per cent of them [the sensors] in hand now, and we will receive the rest over the next year or so,” Kahn said.

Expected to map tens of billions of near-Earth objects, stars and galaxies over a wide swathe of the night sky, the scope of the LSST project is huge. To build it, the US National Science Foundation budgeted $473 million, with the US Department of Energy providing $165 million for the camera.

LSST will be used to study topics including detection of potentially hazardous asteroids, the structure and evolution of the universe, dark matter and dark energy.

Kahn, a professor of natural sciences in the physics department at Stanford University, described the project as “more an experiment than just running an observatory.” But nobody’s worried. Much of the budget has gone into risk analysis and analysis to avoid failure, which he calls “pre-engineering,” since 2003, when the project got serious.

“LSST is deep into the construction/fabrication phase of the project, with significant work being undertaken by collaborators and industrial partners around the world,” Kahn told his San Diego audience.

Solid partnerships
Those partners include the the Centre National de la Recherche Scientifique (CNRS) and the CC-IN2P3 scientific computing center, both in France, who are working on cameras and sensor testing. And despite several changes of government in Chile, partnerships there have been solid, Kahn said.

“Chile is proud to have this world investment in their country, and they are more advanced than the United States on light pollution and other aspects of space in their country,” Kahn added.

“This is a very complex project, and, as would be expected, not everything goes perfectly smoothly as we try to bring all of the components together,” he said, although overall the project does now appear to be progressing well.

“We are building an integrated survey system. Over ten years, it will repeatedly take up to 1000 observations of every part of the southern sky. We are going to go deep, wide and fast. We will measure everything that moves in the sky, everything that varies in brightness.”

Extraordinarily, the amount of data produced will be equal to everything human beings have ever written down, while images captured by LSST will exceed all of the cell phone pictures ever taken.

Kahn said that the camera will capture 30 terabytes of data each night, with images quickly made public. LSST will issue alerts to the world’s astronomers whenever something has changed. “We will issue tens of billions of alerts,” Kahn said, “ten million of them every night.”

Science goals
The project has four main scientific goals: the sky census; studying the structure of the Milky Way; exploring the transient optical sky; and determining the nature of dark energy and dark matter.

It will do all that in 15-second exposures. “Each time, within 60 seconds of closing the shutter, we have to transfer all data to the processing center in Illinois, and broadcast it to the world,” Kahn said.

A combined optic for LSST was fabricated at the University of Arizona’s Richard M. Caris Mirror Laboratory, and is now complete. It marks the first time that a compound optic has been employed for such an application, with the surface polished to a fraction of a millimeter.

“I am proud to say this is complete now,” Kahn said. “It was a somewhat delicate operation.”

Once operational, schoolchildren will be among those involved as the LSST team assigns one galaxy each to schools around the world and allows them the first human look at newly discovered supernovae, almost as soon as they explode.

“LSST will make fundamental discoveries,” Kahn concluded. “But it has been a real trip just to try to build it.”

• Key international partners on the project include dome provider European Industrial Engineering (EIE), in Mestre, Italy. The telescope mount assembly is being made by GHESA, Ingenieria y Tecnologia S.A. and Asturfeito, S.A., in Spain, with the focal plane array and sensors provided by Teledyne-owned e2v in UK and the University of Arizona. Munich’s ECM provided the camera cryostat.