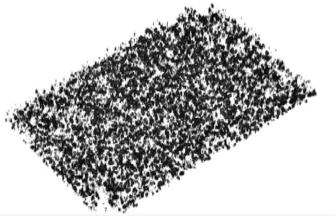 Under the surface: metallic flakes

Along with a pigment of the chosen visible color, the base coat contains metallic flakes held in a suitable binder. The alignment and size of the flakes has a critical influence over the final appearance and performance of the paint, and assessing these parameters is a key part of the quality assurance operation on a factory floor.

A project at the University of Liverpool has now developed an OCT-based process able to scan automotive panels and non-destructively distinguish the flakes within the coating, allowing their nature and distribution to be measured. The work was published in Optics Express.

The results could lead to a significant advance for QA testing in the automotive industry, offering an improvement on the ultrasound imaging commonly employed at present to check the quality of the paintwork. The findings also provide further evidence of OCT's potential usefulness away from its traditional application areas in the biomedical sector.

"OCT and our image analysis approach was able to quantitatively and automatically measure the size, number and orientation of metal flakes in industrially applied car paint," commented Yaochun Shen of the University of Liverpool. "As far as we aware, no one is currently using OCT in an automotive factory for any such measurement, and no one else has previously measured metallic flake in situ with OCT."

The team's method employed a high-resolution time-domain full-field OCT operation, alongside computational analysis techniques employing a variational image segmentation model developed specifically by the project. After OCT scanning, the base coat layer was initially isolated manually from the raw OCT data, after which background noise was reduced and the signal intensity of the flakes enhanced by computation.

In the published paper, tests on examples of silver, blue and black painted items supplied by Jaguar Land Rover showed that the new method could automatically identify and perform 3D measurements of metal flakes measuring ten microns in diameter and one micron thick. The picture built up from the OCT data of flake distribution within the paint was subsequently found to be consistent with an analysis obtained from cutting and polishing of cross-sectional samples.

Industrial production lines
Resolving individual flakes within the base coat is not possible with existing commercial techniques, according to the team, and the project now aims to speed up the measurements in order to allow them to be used for real-time monitoring during the application process. That may ultimately allow the method to be used for in-line monitoring, detecting problems during the painting process as they occur.

The successful study of automotive paint is also a further indication of the potential impact that OCT may have in industrial applications. Among the other possible avenues now of interest to the Liverpool team is the use of OCT to examine the coatings of pharmaceutical tablets, checking for thickness uniformity and the presence of any defects.

"OCT is till a relatively new technique, not well known outside of medicine, and there are probably still plenty of unexplored application areas for the method," noted Shen. "Although its depth penetration and limited ability to measure through objects will always keep some applications out of reach - and it will never image through metals for example - choice of the right wavelength can allow it to measure more than one millimeter deep into a range of materials."

One appeal of the OCT modality in manufacturing is the inherent ability of its data to measure multiple different parameters of interest. Shen commented that under the right circumstances features such as thickness, roughness, and dryness should all ultimately be obtainable from the OCT data set.

"OCT has a wide range of capabilities, and the underlying physics can be applied to any translucent system," he said. "And it is also an easy and reliable technique to implement, which will facilitate its implementation in industrial production lines. Its impact will grow as it becomes more widely known and understood."