Most commonly used technique is laser beam melting on bed of metal powders including aluminum and titanium. 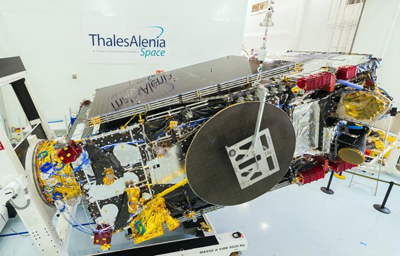 With the recent launches of the Telkom 3S, SGDC and KOREASAT-7 satellites (see below), plus satellites in the Iridium Next constellation, Thales Alenia Space (TAS) has now sent into orbit at least 79 metal parts made by additive manufacturing (3D printing) and 350 polymer tube supports so created for chemical propulsion systems.

The work started two years ago, in April 2015, with the first 3D-printed aluminum antenna support, sent into orbit on the TurkmenAlem MonacoSat satellite. Since then, all of the company’s telecommunications satellites employ lightweight 3D-printed antenna supports and reflector fittings.

In mid-January 2017, with the successful launch of the first Iridium NEXT satellites, TAS also launched into orbit satellites with propulsion system tube supports, the first flight application of thermoplastic additive manufacturing.

TAS says its next step will be the manufacture of larger parts using this process, such as dual antenna supports for a new telecom satellite, "to be launched shortly".

These parts measure 480 x 378 x 364 mm, which the company says represents "a real challenge from the manufacturing standpoint".

“Our development efforts are now focusing on integrating several functions in a single part, such as mechanical, thermal and radio-frequency functions,” said Florence Montredon, Additive Manufacturing Technology Development manager at TAS. “The challenge lies as much in the design process as in the production technique.”

TAS believes that additive manufacturing provides real benefits for spaceborne products. For example, it allows the design and manufacture of single-piece structures, as opposed to a conventional manufacturing approach, which entails the assembly of several different parts to form a structure.

The consequecne is a significant reduction in weight, along with cost savings. The tube support illustrates the technique's ability to replace several parts with a single-piece structure, thanks to additive manufacturing, while also introducing new functions.

Additive manufacturing also means greater design freedom and the absence of tooling, which makes it ideal for producing complex parts – with curves, holes or cavities – that are typically produced in small runs or on a one-off basis. 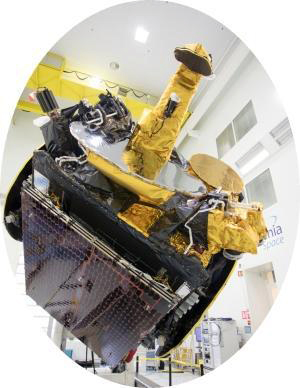 Out of the total of 79 parts produced by AM so far, 47 have different designs and are used on the satellites, where they carry out 13 different functions. TAS adds that some of these parts are design variants for a given function. The tube supports are made of a polymer and are all identical, with 35 used on each of the ten satellites launched to date.

TAS generally focuses on metallic materials for this process, including aluminum and titanium. The most commonly used technique is laser beam melting (LBM), with a bed of metallic powder. One or several lasers progressively melt the powder, layer by layer, in a controlled atmosphere.

This technology demands a high level of expertise to control the various design restrictions and the “printing” machine’s complex settings. Producing a part may take several hours or even days of continuous printing.

SGDC is a dual (civil-military) satellite for the customer Visiona, a joint venture of aircraft manufacturer Embraer and Brazil’s telecommunications operator, Telebras. It will provide sovereign and safe means for the strategic communications of the government and the defense and reduce the digital divide in Brazil by giving internet access to the whole country.

This program reflects the close collaboration between Thales Alenia Space and Brazil, which includes the training of 30 Brazilian engineers in space industry techniques as well as the integration aboard the satellite of a structure panel made by the Brazilian company CENIC.