FLAIR will use infrared absorption spectroscopy in 2-5 µm and 8-12 µm windows.

A new type of photonic sensing-enabled drone that can provide air quality data to ground-based emergency services in real-time will improve direction of emergency evacuations after incidents such as wildfires, chemical blazes, or volcanic eruptions.

Critical air quality information is needed for deploying emergency services, evacuations and survival in the aftermath of a catastrophic event, such as a volcanic eruption, a wildfire or a chemical plant explosion.

Reaching speeds of up to 120 km per hour and covering an 80 kilometre radius, the drone is fitted with a novel photonic sensor that can simultaneously detect dozens of toxic gases at once.

Flying through some of the toughest environments on earth such as dangerous clouds or poisonous plumes, the FLAIR (or ‘Flying ultrA-broadband single-shot Infra-Red Sensor’) drone is designed to provide real-time air quality data used for quick decision-making during evacuations and the deployment of rapid response emergency services.

Expecting to have a prototype ready in 2018, the FLAIR project, which is coordinated by Tekever Autonomous Systems in Portugal, received a grant of €3 million from Horizon 2020 via the Photonics Public Private Partnership; the project which started at the end of 2016 is scheduled to run through 2019.

André Oliveira Project coordinator of Tekever commented, “For the first time, a drone reaching altitudes of up to 4000 metres will be able to detect fine traces of airborne molecules that are dangerous to our health using a state-of-the-art laser sensor. The drone can map out areas that are too dangerous for humans to enter and can transmit data in real time to a ground processing unit.” 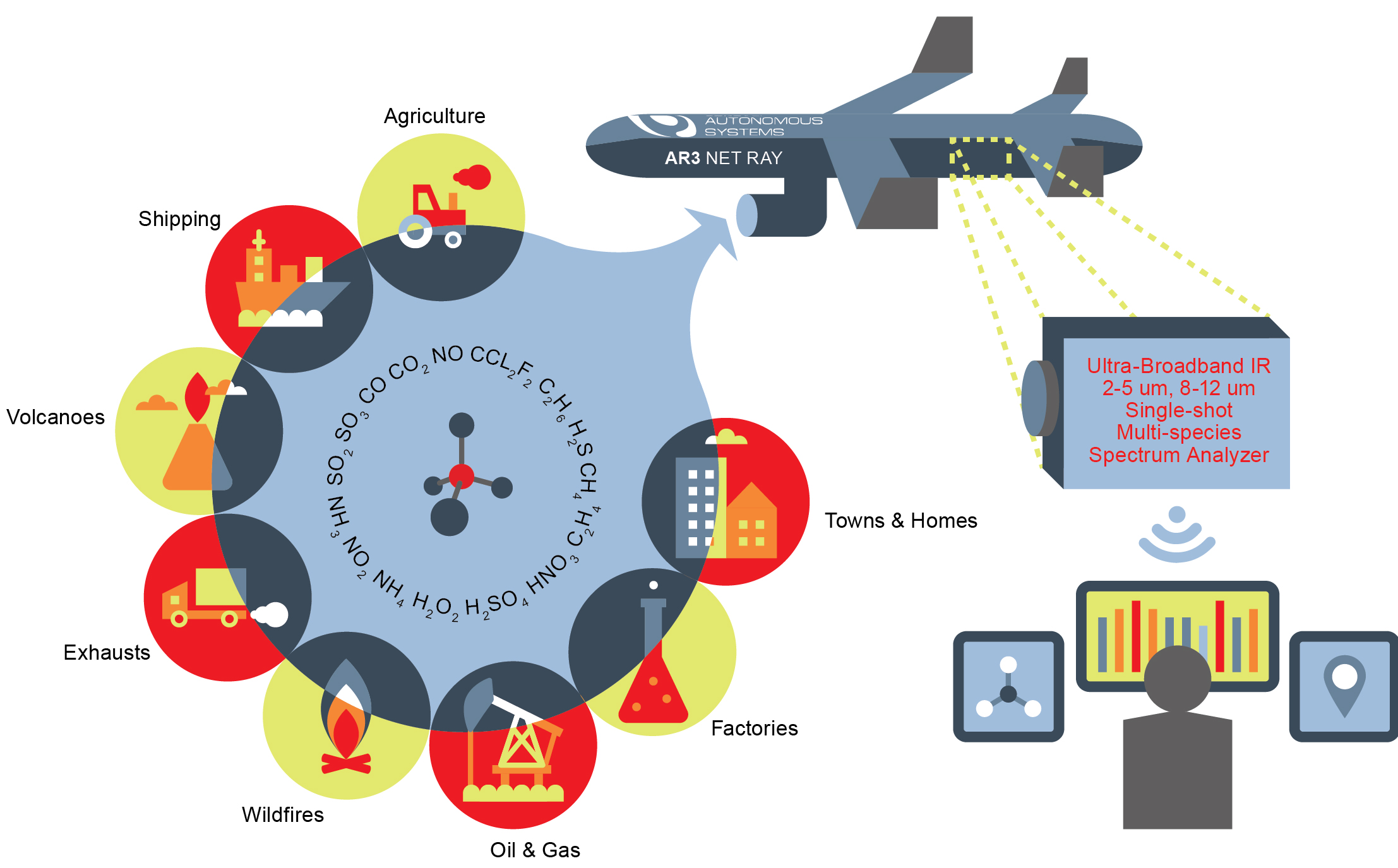 Deployment scenarios are described in the above schematic.

Natural disasters like the infamous eruption of Iceland’s Eyjafjallajökull in 2010 can severely impact air quality and safety in the short term and are often outside the reach of fixed monitoring station networks.

Similarly, wildfires, which destroyed 700,000 ha of land in the EU this year according to the European Forest Fire Information Service (EFFIS), and 8.8 million acres caused by 52,699 individual fires in the USA in 2017, were estimated to kill up to 339,000 people worldwide per annum. 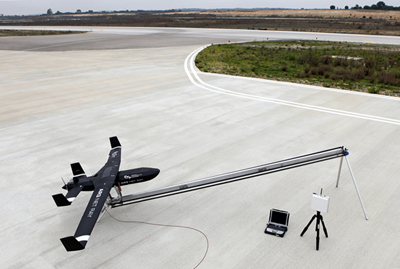 Ready for lift off: Prototype drone undergoing tests in Portugal.

However, because the FLAIR sensors work in a much wider spectrum, more detailed signatures in the gas mixture can be detected, such as carbon dioxide, methane, sulphur oxides, and nitrogen dioxide.

It works by beaming the sampled air in a so-called multipass cell to increase the total optical path length for exposure with a super-continuum laser, allowing the tiniest concentrations of complex, toxic gas mixtures to be detected.

The gas concentrations are measured by reading the characteristic frequencies, or signatures, of the air sample, that become absorbed and dimmed in the laser light. To improve detection, these unique frequencies of the multiple potentially hazardous gases are separated.

The light then passes through a series of gratings and lenses, illuminating the surface of a multi-pixel detector, a device able to distinguish particles at the photon level. From these separated pixels the system can then detect exactly ‘what’ and ‘how much’ of the poisonous gas is present. The drone then relays this microscopic information to the user on the ground in real time.

“Immediate detection with such accuracy and precision, without putting lives at risk allows us to visualise vast areas of danger much more effectively. A tailored response can therefore be deployed to disaster situations, reducing damage or even saving lives,” said Oliviera.

“For the first time a gas sensing device has been created from the hybrid of an optical spectrometer and a high-resolution spectroscopy gas sensor. By employing infrared absorption spectroscopy in either the 2-5 µm and 8-12 µm wavelength windows where most of the harmful gases have absorption signatures, the optical sensors can detect many molecules, simultaneously in real time,” Oliviera said.