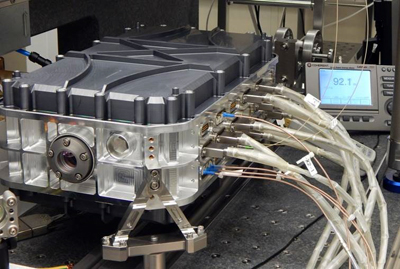 At Photonics West 2018, which takes place in San Francisco between 27th January and 1st February, the Fraunhofer Institute for Laser Technology will showcase its latest developments at the exhibition alongside some 1,300 other companies.

ILT’s spectrum is broad, ranging from beam source development and additive processes to Industry 4.0. The exhibitor commented that its highlights will include a laser platform for space applications and a laser cutting head that is 90% lighter than conventional alternatives.

ILT scientists have long been working on laser systems for aerospace applications. These efforts have culminated in the Future Laser System, or FULAS for short. They contend that, “Tomorrow's laser and optical systems for the aerospace industry will be built on the foundation of this universal platform.”

FULAS features space-grade components as well as semi-automated assembly technology. The FULAS demonstrator has now passed environmental qualification tests conducted in the climate chamber of Airbus Defence & Space. The ILT team is now developing and building the beam source for the MERLIN mission.

With the FULAS technology development project, led by Airbus DS GmbH (ESA funded, with DLR German Space Agency support) a platform for lasers in spaceborne LIDAR instruments has now been developed in cooperative engineering between the ILT and industry.

This platform enables a wide range of missions such as for atmospheric monitoring (of trace gases, aerosols, wind speed). Its mounting technology is based on low outgassing solder interfaces which allow for high mechanical and thermal stability demonstrated in thermal vacuum tests.

Fraunhofer IAF optimized the production of monocrystalline diamonds, while Fraunhofer IPT worked on ultra-precision tools for machining diamond surfaces. Their efforts paid off: it is now possible to produce diamond substrates with diameters as wide as 10 mm.

Diamond's refractive index is high at 2.4. These crystals also conduct heat remarkably well. These properties enable engineers to scale laser optics down to much smaller dimensions: the laser cutting head developed at the Fraunhofer ILT is 90% lighter than comparable conventional components with glass lenses.

The diamond lenses and a 1 kW fiber laser underwent an initial set of successful trials in 2017. This combination was able to cut 1.5 mm stainless steel without any difficulties. Now the team is working on an upgrade to achieve higher performance. Project Manager Martin Traub says, “Individual components have been tested for 2 kW, but we're particularly interested in 4 kW.” 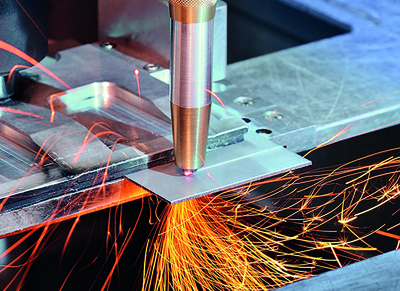 Fraunhofer ILT also wrapped up the BRIDLE project, an initiative to develop fiber-coupled diode lasers, in 2016. One of its objectives was to investigate laser diodes' dense wavelength coupling for demanding materials processing applications such as laser cutting.

Researchers expect that it will not be long before diode laser-based beam sources provide the winning combination of optimum energy efficiency, very good beam characteristics and competitive manufacturing costs.

The team built a demonstrator that successfully coupled five wavelengths from different emitters on one bar into one 35 µm fiber. Its output power is 46 W, but various options allow for further scaling. Another system with around 800 W output from a fiber with a core diameter of 100 µm has also proven its merits in cutting tests.