Sales and orders on the up at SLM Solutions 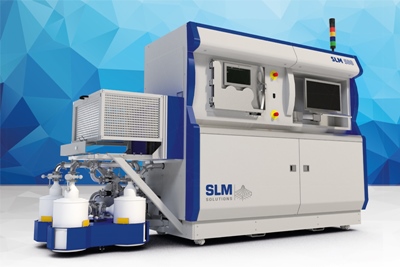 SLM Solutions, the laser additive manufacturing equipment vendor based in Lübeck, Germany, has reported a sharp upturn in both sales and orders in its latest trading quarter.

For the three months ending September 30, sales of €21.2 million were up more than 40 per cent year-on-year, while orders for 120 machines so far this year represents a substantial rise from the 84 units registered over the same period of 2016.

The figures represent evidence of a strong turnaround from a turbulent end to 2016 and start to 2017, after the company’s shareholders rejected a buy-out deal offered by industrial giant GE.

Frame contracts bode well
Company CEO Uwe Bögershausen, who has acted as lead executive at SLM since the departure of Markus Rechlin in the wake of the failed GE takeover, said of the latest results:

“Among other things, the frame contracts we have signed with customers in Asia over the past months underscore the high level of interest in our technologically leading machines.”

Bögershausen says that these frame contracts have created a “springboard” for SLM to meet its sales target of €500 million with a pre-tax profit margin of 20 per cent for 2022.

In the first nine months of this year, the company has posted a pre-tax loss of €4.6 million on sales of only €50.2 million. However, SLM is anticipating a bumper final quarter, after which it expects full-year revenues to hit somewhere between €110 million and €120 million.

That and the final sales result for this year will depend to some extent on the reception that its new SLM 800 machine receives at this week’s Formnext trade show in Frankfurt. On the release of the new tool, CEO Bögershausen said: “Technologically, we want to become the market leader thanks to total manufacturing integration with both existing factory and production processes as well as Industry 4.0 connectivity over the next few years.”

Among other features, the new equipment offers laser power monitoring – including for multi-laser options – and upgraded control software.

Another positive development at SLM was last month’s successful placement of a €59 million convertible bond. “[This] has once again shown that SLM Solutions, as an independent German company, can finance itself via the capital market and is thus a reliable partner for its customers in the long term,” observed Bögershausen. 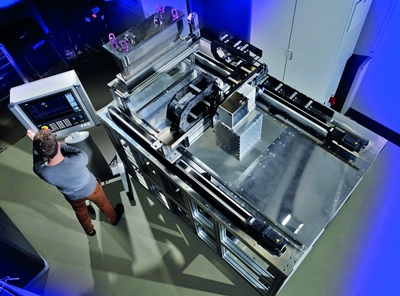 Formnext launches
SLM’s competitors will also be showing off their new wares at the Formnext event. Among them is former suitor GE Additive, of which Concept Laser is now a key element. It is set to launch a new meter-class laser powder bed fusion machine, developed under GE’s “Project Atlas” effort and boasting a 1 kilowatt laser for faster production speeds.

GE Additive says that the system is suitable for large components requiring high-resolution and complex geometry, including aerospace-class parts. “The machine incorporates the latest laser technology - and the ability to be reconfigured to incorporate additional lasers – as well as discrete dosing to save on powder and cost,” GE announced.

Also showing a meter-class additive system based on selective laser melting in Frankfurt is a team from the Fraunhofer Institute for Laser Technology (ILT) in Aachen. Their new laboratory-level design incorporates several individually controllable diode lasers, in combination with a moving processing head.

“The advantage of this multi-spot processing is the ability to significantly and cost-effectively increase the system’s build-up rate by increasing the number of beam sources,” claims the ILT team. “With the new system concept, it is also possible to increase the build volume solely by extending the travel length of the axis system – without changing the optical system.”

Christian Tenbrock from the ILT’s “rapid manufacturing” research group said of the setup: “We hope that the system concept will lead to a breakthrough in the successful use of this technology in series manufacturing.”

• Update (November 15): SLM Solutions says that on the first day of the Formnext event it signed a deal to sell 20 of its new 'SLM-800' laser additive manufacturing machines. Said to be worth at least €37 million, the deal will involve delivery of the multi-laser systems between 2017 and 2019.

SLM board member Henner Schöneborn said: "The outstanding quality of build parts that can be achieved on all our machine types, our market-leading multi-laser technology and in particular the large construction chamber of the SLM 800 convinced the customer."