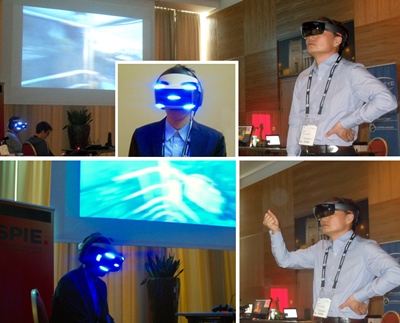 CY Vision, a San Jose startup developing computational holography for augmented and virtual reality (AR/VR) headsets, says it has closed a $7 million round of series A funding.

The company, whose founders initially worked on the approach at Istanbul’s Koç University in Turkey, is hoping to be the first to enable the use of holography in headset displays, and claims:

“This breakthrough holographic technology was created by CY Vision engineers and scientists to make AR/VR a safer and more comfortable experience for all users.”

The emerging technology comes from the laboratory of optics and MEMS professor Hakan Urey, who completed his doctorate at Georgia Institute of Technology, and spent a period at Seattle-based microdisplay developer MicroVision before moving to Koç University in 2001. He has also spent a period as a visiting professor at Cambridge University in the UK.

Urey has been working on displays technology for two decades, more recently turning to computational holography - and co-founded CY Vision in 2016.

Mimicking the eye and brain
The startup’s other co-founder, and now CEO of the startup, is Orkun Oguz. He said in a statement from CY Vision and its financiers: “Our computational holographic technology, combined with pupil tracking, mimics exactly the way our brain and eyes function to present 3D information.

“Our solutions generate the same information to the eyes that a real-world 3D scene would generate, with all the visual depth cues. We will use this investment to develop our technology further, which we believe will solve one of the biggest challenges in AR/VR today related to visual comfort and help accelerate adaptation of AR and VR for enterprises and consumers in coming years.”

Intel Capital’s president Wendell Brooks added: “At Intel, we believe virtual and augmented reality has the potential to redefine human-computer interaction, changing the way we live, work and play. CY Vision’s holographic technology has great potential to play a vital role in the development of the broader ecosystem.”

Optical challenges remain
While AR/VR technology appears to be progressing towards mainstream adoption, issues with image resolution, field of view, and users’ vertigo remain to be ironed out. The latest iteration of consultancy firm Gartner’s infamous “hype cycle” has VR on the “slope of enlightment”, but AR remains stuck in the “trough of disillusionment” - perhaps still a decade from widespread use.

On its web site, CY Vision says that its approach delivers high-quality, full-color 3D imagery combined with "retinal" resolution, a 200° field of view, and less than a milliwatt power consumption - without causing dizziness, motion sickness or headaches.

Many of the emerging industry’s biggest hitters will discuss those issues when taking part in a new one-day industry conference scheduled as a special event within SPIE Photonics West early next year.

Chaired by Bernard Kress – optical architect at Microsoft and its VR headset entity Hololens – the conference takes place January 29 in San Francisco, and will feature contributions from the likes of Intel, Amazon, Google, Oculus, Meta, and 3M alongside leading university developers.

Kress himself is set to open the event with a focus on the potential and challenges surrounding so-called “mixed reality” (MR) technology, which incorporates both VR and AR approaches. He says that key hardware challenges – largely optical in nature – must be addressed for the various technologies to deliver the level of comfort and immersion required for mass-market impact.