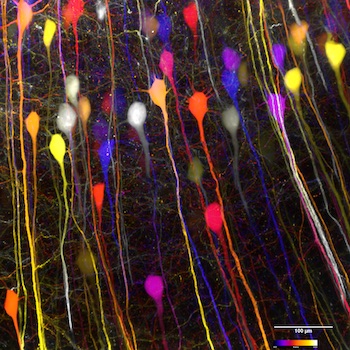 New images generated by Airy light-sheet microscopy (LSM) using a platform from M Squared Lasers are helping researchers to see the firing of individual nerves in animal tissues, and indicate the potential value of the technique for revealing key aspects of neurological behavior.

The Aurora Airy LSM platform developed by a group including M Squared, the University of St Andrews, Kings College London and the National Physical Laboratory, has now produced images showing the networks of nerves in live zebrafish and in ex vivo samples of mouse brains.

M Squared was recently recognized by the UK's Institute of Physics which awarded the company one of its 2017 Innovation Awards, citing the commercialization of the company's Aurora Airy LSM platform and its potentially transformative impact. The company has also won a prize for Best Use of IP in the Sunday Times Hiscox Tech Track 100 awards.

Commenting on the new images, the company said that the Aurora Airy Beam LSM had been used by researchers to produce 3D images that were detailed enough to capture neural connections, a significant step forward for 3D volumetric imaging that should lead to increased understanding of degenerative diseases and organ regeneration.

A basic light-sheet microscopy modality uses lasers to produce a Gaussian illumination profile, shaped into a light sheet and used to illuminate the sample. This has all the inherent advantages that make LSM attractive, offering a large amount of illumination in a single shot while also controlling any potential phototoxicity.

But a Gaussian beam also has some limitations, in particular relating to the field of view (FOV) that it can illuminate. In many bioimaging scenarios, a FOV large enough to view multiple cells or structures and see the interactions between them is becoming the key factor in understanding complex systems, and anything that limits the view is a potential problem.

Tackling Alzheimer's and Parkinson's disease
An Airy profile has a non-diffracting and asymmetric nature, which in practice allows it to retain its excitation pattern over an extended FOV of approximately 600 by 600 microns while still achieving sub-cellular resolution of around one micron - a sweet-spot of FOV, resolution and low phototoxicity compared to other modalities, according to Graeme Malcolm of M Squared.

“The Aurora microscope uses a sheet of light to illuminate a very narrow section in a sample and detects the information at 90 degrees," he commented. "The Airy profile means the beam is curved and has lobes, which allows the light to travel further than any other light sheet, with a wider field of view and lower toxicity to samples cause by light."

An ability to understand how the nerves in the brain function will be essential for answering questions relating to diseases such as Alzheimer’s and Parkinson’s, and the use of mouse models to look for patterns and signals in the neural network is the essential first step in this investigation, according to Malcolm.

A more complete understanding of how neurons in the brain are connected will then allow researchers to analyze the differences between a healthy and diseased brain, a key aspect of diagnosis and treatment.

“For this to happen, a map of the connections and cells needs to be captured, and up until recently only small sections have been investigated looking at a few neurons at a time," said Malcolm. "With this technology larger network patterns can be observed in a fast snapshot with the largest field of view, while still maintaining very high detail. We have captured the way that neurons are structured and how they interact with each other, tackling one of the difficulties scientists have faced in recent years."