Survey and interactive map from Fiber Optic Sensing Association suggests US is lagging behind both China and Germany. 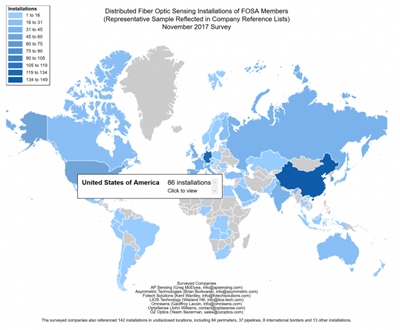 The US lags “well behind” China and Germany in terms of fiber-optic sensing for infrastructure applications – according to what is believed to be the largest application survey of the technology ever published.

From its base in Washington, DC, the Fiber Optic Sensing Association (FOSA) has produced an interactive global map detailing more than 1300 installations of distributed fiber-optic sensing (DFOS) equipment by its members.

It shows China leading the way, accounting for just over 11 per cent of listed deployments. Next comes Germany, with 9.4 per cent. The US is in third with 6.5 per cent, ahead of South Korea with 4.8 per cent. The survey list does not include any "down-hole" applications in the oil and gas sector.

Asset security
FOSA director Mark Uncapher said in response to the findings: “According to our data, the US is well behind China and Germany in terms of total deployments of fiber-optic sensing.”

He insists it is “critical” that US industry and policymakers alike gain sufficient understanding of the sensing technology, to ensure that infrastructure and asset security in the country can be brought fully up to date.

By measuring variables ranging from stresses and strains in concrete to temperature and pressure changes in gas pipelines, fiber-optic sensors are able to provide precise remote monitoring of assets including power cables, pipelines, railways, international borders and other critical infrastructure.

“With fiber-optic sensing, hundreds of miles of highway can be monitored for accidents and traffic flows,” Uncapher said. “Power cable faults and pipeline leaks can be detected and located instantly, and footsteps can be heard on a perimeter in the middle of the night. They are all detectable through fiber-optic sensing.”

FOSA’s survey uncovered 149 installations in China, of which the largest proportion (54) were deployed to monitor power cables. Other physical assets benefiting from fiber-optic sensors include tunnels (22), dams (2), mines (2) and even railway stations (2).

Power cable monitoring also leads the way in Germany, accounting for 31 out of the 132 deployments detailed. Fire detection for tunnels (20) is the next largest application category.

Although 86 installations in the US were logged, that total included only two tunnel fire sensors. The technology appears to be better appreciated in perimeter monitoring, with 12 deployments.

Power control
Uncapher told optics.org that deployments in Asia were being driven by strong investment in new infrastructure of all types, while in Germany the transformation of power generation to renewable energy sources was providing momentum.

“Both situations result in the installation of large numbers of high-voltage power cables, and the use of fiber-optic sensing to monitor those cables has become commonplace,” he explained. “The reason power generators do this is cost savings: by monitoring power cables for ‘hot spots’ and overloading, they can use smaller cables, [so that] when they see peak capacity occurring on one line, they adjust the burden on that cable and reroute the load.”

In contrast, the philosophy in the US has simply been to deploy power cables with a higher rating in order to handle peak loads. “We are working to make US power companies aware that, by monitoring their cables with fiber-optic sensing, they can have significant cost savings with optimally sized cables,” Uncapher said.

Regarding fire detection for tunnels and other structures, the key difference is that Europe and Asia have standards for fiber-optic heat detection, while automated sprinklers are still the norm in the US. “We need standards and pilot projects so that industry can recognize the value of fiber-optic sensing for fire detection,” Uncapher suggested.

Despite that, he indicated that there was plenty of “low-hanging fruit” in terms of US infrastructure opportunities – ranging from pipelines to newer areas like smart roads. “The fact that the technology has been proved in Europe and Asia will help speed deployment in the US as we work to raise awareness here,” he told optics.org.

Pipeline politics
Uncapher thinks that pipelines should prove particularly ripe for DFOS technology, thanks in part to recent Congressional attention. “In fact, Congress passed bipartisan legislation in 2011 and 2016 to advance greater safety measures, one aspect of which was leak detection standards,” he points out.

“The American Petroleum Institute and the federal pipeline agency, PHMSA, have been working on this challenge, and FOSA has been working closely with them to provide information on the performance capabilities of fiber-optic sensing.”

Adoption is already happening in the form of fiber-optic leak and intrusion detectors, while earlier this year SoCalGas said it would deploy sensors on its new pipelines. “We expect other operators to move in this direction soon,” said Uncapher, adding that FOSA anticipated growing adoption across the board as DFOS awareness builds and industries learn how to integrate the technology.

In total, the 1300-plus DFOS installations identified by FOSA span more than 33,000 kilometers in length – nearly enough to stretch around the Earth’s equator.

The organization also maintains a list of case studies where DFOS is already used, detailing applications in transportation, energy, security, oil and gas, and defense.

FOSA is hoping to promote awareness of fiber-optic sensing technology, and says that it intends to continue gathering similar data from additional sources, in order to provide a more complete picture of global DFOS deployments.