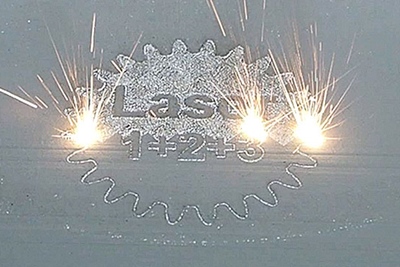 Trumpf has launched a new and larger laser additive manufacturing system for metal components at the Formnext trade show, and revealed its intention to become a major player in the emerging sector.

The Ditzingen, Germany, firm’s “TruPrint 5000” system – built around three 500 W fiber lasers and custom scanner optics – is claimed by Trumpf to be the world’s “fastest and most productive medium-format 3D printing system”.

Based on the laser metal fusion (LMF) technique, it works by fusing metal powders layer-by-layer into desired component shapes, at speeds now said to be suitable for series production.

Market share target
With the technology now seen to be at something of an inflection point in terms of commercial uptake, and automotive and aerospace manufacturers forming manufacturing alliances with key equipment providers, Trumpf CTO Peter Leibinger said in a release from the family-run company:

“If the market for 3D printers continues to develop in line with current indications, then we see an opportunity for our company to achieve additional revenues of half a billion euros in a timescale of five to seven years. We want to gain a leading role in the market and secure a market share of around 20 per cent in the medium term.”

Trumpf will be up against rivals including SLM Solutions, the GE subsidiary Concept Laser, EOS, and 3D Systems, but claims one major advantage in the ability to source critical laser and optics technologies internally.

“We are the only provider anywhere in the world to combine all these competencies under the one roof. As such, we are a one-stop shop for our customers,” said Leibinger, adding that the company's global service network was another key advantage.

ILT development
Trumpf also has a close relationship with the Fraunhofer Institute for Laser Technology (ILT) in Aachen – the same city hosts Trumpf’s new additive development unit - and ILT researchers are among those exhibiting the latest additive technologies at the Formnext show in Frankfurt this week.

“As a seedbed for technologies of the future and with its proximity to RWTH Aachen University and the Fraunhofer ILT, Aachen is an ideal location to further develop our additive manufacturing technologies,” says Leibinger.

At Formnext, ILT developers are showing off a system featuring a multi-spot, moving laser processing head that is said to enable faster build-up speed of the metal components. Scaling up that speed to a level suitable for true volume production of metal components with additive techniques has long been identified as a key challenge to overcome.

Trumpf says that the triple-laser approach of the TruPrint 5000 is part of the solution. “The three lasers are fitted with optics specially designed by Trumpf, enabling them to operate simultaneously at any point in the system's construction chamber,” states the company. “As a result, they can generate components much faster and more efficiently, irrespective of the number and geometry of the components.”

It claims that, unlike other multi-laser systems, the scanner-guided sources are able to operate anywhere within the LMF construction chamber. “This makes the 3D printer particularly fast and productive,” Trumpf says, adding that by calculating the ideal laser paths automatically, the three sources can each expose multiple parts – before the outer contours of each individual component are finished with a single beam, to deliver a “seamless” finish.

Servo valve collaboration
While some of its rivals at the Frankfurt show have launched additive systems capable of producing larger-sized components, Trumpf indicates that the TruPrint 5000 can make complex parts from all weldable materials, up to 300 mm in diameter and 400 mm high.

Also highly automated, the new system has been used in a collaboration alongside Bosch Rexroth and Heraeus Additive Manufacturing to redesign a servo valve that can be made in series production.

“This involves supplementing conventionally manufactured pre-forms with 3D-printed and laser-cut parts for cost-effective manufacture of the valves,” Trumpf explained. “The servo valves printed by TruPrint 5000 are considerably lighter and more compact, and the optimized channel guides reduce throttle losses and increase energy efficiency.”

“All our new 3D printers are selling well, and we're gaining increasing market shares in various sectors,” Leibinger noted. “Accordingly, we will most definitely be further investing in this highly promising field.”