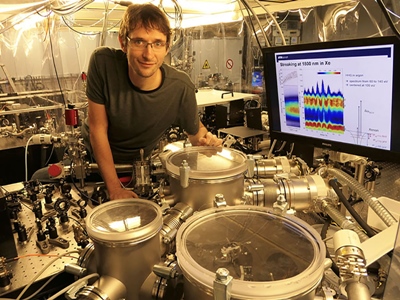 Researchers in Switzerland have set a new benchmark for the world’s shortest laser pulse, shrinking an X-ray burst to just 43 attoseconds.

The ultrashort emission improves on the previous best of 53 attoseconds, set earlier this year by rivals at the University of Central Florida, and opens up the possibility of viewing electronic motion during a chemical reaction.

Achieved by a team in Hans Jakob Wörner’s physical chemistry research group at ETZ Zurich, the record-breaking ultrashort pulse was generated using a different – and less complex - technique to that previously employed in attosecond metrology.

Wörner and colleagues based their approach around readily available optical parametric amplifier (OPA) equipment, pumped by a Ti:sapphire laser.

“Our results prove that the popular and broadly available scheme of post-compressing the output of white-light-seeded OPAs is adequate to produce high-contrast isolated attosecond pulses covering the L-edges of silicon, phosphorous and sulfur,” they write in a journal paper describing the advance, adding:

“Our new reconstruction method and experimental results open the path to the production and characterization of attosecond pulses lasting less than one atomic unit of time (24 attoseconds) and covering X-ray absorption edges of most light elements.”

Commercial equipment
Their Optics Express paper details how the X-ray pulses are generated, initially from the combination of a Femtolasers (now part of Spectra-Physics) Rainbow Ti: sapphire laser and an optical parametric amplifier provided by the Lithuanian company Light Conversion.

That equipment provided a femtosecond-pulsed broadband emission stretching from 1.1 µm to 2.2 µm. Among attosecond-pulse researchers, the longer wavelength is regarded as mid-infrared light – even though it would not generally be described as such.

The ETH Zurich team then used a home-built transient grating frequency-resolved optical gating (TG-FROG) to characterize the precise duration of the femtosecond pulse, before focusing two-cycle mid-IR pulses into high-pressure gas cells filled with neon or xenon, via an off-axis parabolic mirror.

A multi-mirror optical system, chopper and amplitude gating combined to turn that beam into attosecond pulses, with further refinement delivering the record-breaking duration of just 43 attoseconds.

While inevitably complex, the new scheme is said to offer a significant reduction in the typical complexity of attosecond pulse generation equipment, largely because it removes the need for active stabilization of the carrier-envelope phase (CEP).

“[Our approach] establishes the popular, robust and widespread scheme for generating CEP-stable two-cycle pulses in the mid-infrared as an ideal approach to generating the shortest isolated attosecond pulses ever measured,” concludes the Zurich team in its paper – adding that the work “demonstrates a path towards synthesizing and characterizing attosecond pulses shorter than one atomic unit of time (24 attoseconds).

Slow-motion chemistry
As well as raising the intriguing possibility of creating “slow motion” views of electron activity during chemical reactions, Wörner and colleagues suggest that such reactions could also be directly manipulated with a laser to control and even alter their course.

They explain that such targeted interventions have not been possible previously, because the sheer speed of electron movement in molecules could not be reached – until now.

Another potential application could be the development of more efficient solar cells, because attosecond metrology would provide a method for directly monitoring the ultrafast steps involved in photoelectric conversion, such as electron-hole recombination.

“A detailed understanding of the charge transfer pathway could help optimize the efficiency of the next generation of photosensitive elements,” they suggest.