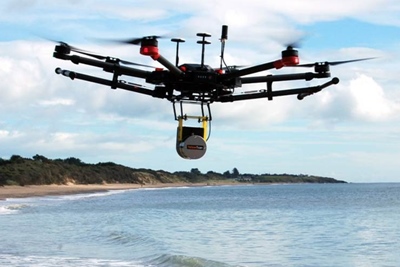 The two companies showed off the resulting lightweight “Surveyor LiDAR” system at this week’s Commercial UAV Expo in Las Vegas, demonstrating a range of 100 meters possible with Velodyne’s “Puck” sensors.

The Puck sensors from Velodyne, which have been developed for applications in advanced driver assistance and autonomous vehicles, weigh less than a kilogram, meaning that YellowScan’s 3D data capture system can be mounted to virtually any drone.

“The result is a real-time in-flight lidar monitoring platform, with users able to see how the final map is being generated in real-time during the drone mission, and the basic map datasets available immediately after the mission,” say the two companies.

Erich Smidt, who heads up European operations at Velodyne, said: “The VLP-16 Pucks are some of our newest offerings, with significant effort put into reducing weight while maintaining the resolution and reliability expected of Velodyne’s industry-leading lidar sensors.” 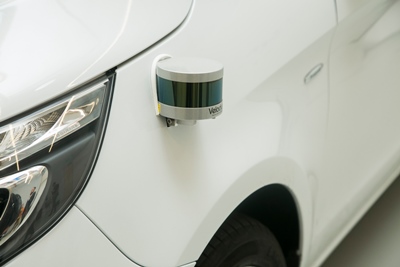 Production quadrupled
Earlier this month Velodyne said that it had “more than quadrupled” production of lidar sensors at its San Jose factory, in direct response to booming demand from the fast-growing autonomous vehicle sector.

While it faces stiff competition from dozens of heavily financed competitors, Velodyne – which previously specialized in high-end audio equipment – has managed to establish itself as an early mover in the field, and founder and CEO David Hall said:

“With the tremendous surge in autonomous vehicle orders and new installations across the last 12 months, we scaled capacity to meet this demand, including a significant increase in production from our 200,000-square-foot Megafactory.”

Employee numbers across the company’s three facilities in California are said to have doubled in just six months. As well as the “Megafactory”, Velodyne has a research center in Alameda, and its original manufacturing site in Morgan Hill.

Among its key partners in the automotive sector is Mercedes-Benz. Last month the German auto giant selected Velodyne’s “VLP-32C Ultra Puck” sensor for further development within its driverless vehicle program.

Mercedes-Benz is working on systems integrating various technologies including lidar to provide continuous situational analysis through sensor fusion. “The goal is to guarantee reliable results to allow a robust planning of safe trajectories for automated vehicles,” it explains, with Axel Gern, its VP responsible for autonomous driving research and development in North America, adding:

“We recognize Velodyne as a market leader for lidar sensors, helping us getting fully autonomous vehicles on the road.”