€2.4 million in EU funding granted for productization of scanner developed by VTT spin out company. 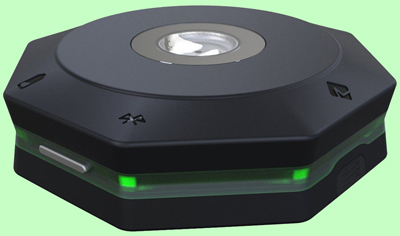 Spectral Engines, a spin out from the VTT Technical Research Centre of Finland, is set to launch a portable drug screening device police patrols can use for rapid and cost-efficient on-site screening of suspected drugs.

The pocket-size scanner displays the results in the operator's mobile phone in a matter of seconds. Spectral Engines says that there is significant international demand for such an innovation - based on infrared radiation - which explains why a total of €2.4 million in EU funding was granted for the device's productization.

The small device, which weighs only a few hundred grams, will "change the future of police work in war on drugs", commented Spectral Engines. Besides being the first pocket-size drug screening device available for field work, the tungsten lamp-based device is also more than 20 times cheaper than other devices in current use, which often rely on Raman technology.

Spectral Engines's CCO Janne Suhonen commented, "Our drug screening device is significantly smaller than the competing ones currently on the market. It is designed for field work and it uses the mobile phone as its user interface. Devices are cloud-connected which enables easy machine learning-based application algorithm development for different drugs."

The scanner allows an accurate and reliable identification of such drugs as cocaine, heroin and amphetamine from very low drug concentrations. As required, the multi-purpose device's identification algorithms can be updated to identify various "designer drugs", such as MDMA (Ecstasy), ketamine, GHB, Rohypnol, and LSD (acid), as well.

In addition to police use, the scanner is also suited for the use of customs officers, military and other similar organisations, for whom it can be important to identify unknown and potentially illegal substances. 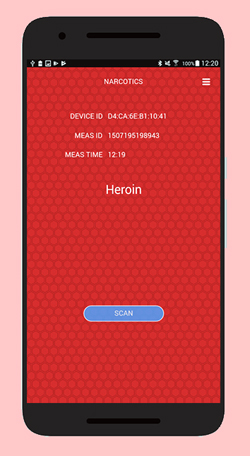 Measurements are displayed by mobile phone.

The technology of the device created in the NarcoScan project is based on infrared spectroscopy and the MEMS technology studied at VTT. Suhonen added that the first products are likely to enter market in the spring of 2018.

"The competitive funding from the EU Horizon 2020 programme guarantees that we can proceed rapidly from the first prototype to mass production, and allows us to assign several man-years of labor on this productisation project. We will be able to launch the first products next spring, and early in 2018 we will also begin field testing the device with our first pilot customers," he said.

During the scanner's development, the company has already collaborated with leading criminal laboratories worldwide, and its research partners come mainly from the United States and Europe. The EU funding enables expanding the cooperation to various new laboratories for the development of model libraries.

Spectral Engines’ NIRONE sensors work at the true near infrared (NIR) spectral range from 1350 to 2450 nm which means better sensitivity and specificity in material sensing applications. These sensors are said to offer "excellent performance, fully comparable to the best laboratory instruments in a small package and only a fraction of the cost".

The NIRONE sensors are primarily designed for system integrators for creating optical scanning systems. Compact NIRONE Sensors include two integrated light sources, NIR sensor, read-out and driving electronics and built-in intelligence, which makes for stable outputs even in the most demanding industrial or consumer applications. The spectral sensor can easily be adapted to diverse measurement needs with suitable front optics.

The associated NIRONE Evaluation Kit provides a basis for technology evaluation and application studies. The evaluation kit includes a USB communication board and the sensor can be controlled via PC by using dedicated SensorControl software. Spectral Engines stated, "The evaluation kit is the easiest and fastest way to start your NIR application studies right away. Our SensorControl software is free to use with any of our devices."