Camera leveraging advances in both optical components and systems technology ramps up production. 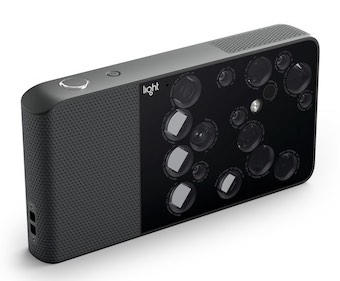 The L16 camera developed by venture-backed California-based Light recently commenced shipping to pre-order customers. This marks the next phase of the company's plans for a novel optics architecture intended to match or exceed the performance of DSLR cameras, but do so from a more consumer-friendly unit.

The camera's design employs 16 different lenses and optical modules within the one chassis, capturing a scene at several different focal lengths and then applying algorithms specifically developed for the purpose to combine the multiple exposures into a single high-resolution image.

Although only slightly larger than a current smartphone, the L16 is designed to deliver significant improvements in image quality and photographic performance over that currently possible from consumer cameraphones, as well as capturing certain image information that a conventional camera would not gather at all.

"The problem that besets DSLR photography is the bulk of the equipment involved and the need to carry multiple lenses," commented Rajiv Laroia of Light. "Smartphones are much easier to carry, but cannot deliver the same image quality, which is frustrating for photographers using them."

Laroia, whose previous industrial background was in the comms sector for AT&T Bell Labs and Qualcomm before he turned to the optics of photography, designed a solution that would leverage both the recent advances in optical component technology that smartphones have spurred, and some novel systems technology developed for this particular purpose.

Adjustable depth of field
The L16 replaces the bulk and weight of a traditional single-lens camera with several small lenses and sensors, that lie at 45-degree angles across a flat plane. The internal architecture exploits some of the principles behind folded optics to keep the chassis height on a par with that of the smartphones which customers are used to carrying, despite the presence of 16 individual optics units delivering three different focal lengths of 28, 70, and 150 mm.

In use, the L16 intelligently chooses the best combination of the three different focal lengths for each scene, depending on the level of zoom, and adjusts its mirrors to support various fields of view. At least ten of the individual cameras fire simultaneously in each shot, capturing slightly different views of the same scene.

"In normal DSLR cameras, a single conventional lens essentially takes the same entire picture through every part of its aperture," said Laroia. "But we are taking multiple individual pictures from different apertures and then combining them digitally. In a sense we do in the digital domain what a conventional lens does in the analog domain."

Once a scene has been captured, the computational algorithms developed by Light overlay exposures from the higher focal lengths on top of those from lower focal lengths, to enhance the level of detail in the final photograph. The result is one high-resolution 52-megapixel photograph, formed from multiple perspectives.

Fusing the multiple captured scenes together for a final image also allows the depth of field to be changed computationally after a photograph has been taken, as the processing algorithms can effectively adjust the aperture values being displayed. Plenoptic cameras demonstrate a similar ability too, although via a different technique, but Laroia believes that the Light architecture can deliver a better result than the plenoptic approach and derive more accurate depth information from the captured visual data.

Founded in 2013, Light has been developing the L16 and its optical technology since 2015, raising $25 million in Series B funding that year and a further $30 million in Series C finance in 2016. The goal is for the combination of high resolution and accurate depth information delivered by Light's optical architecture to find applications in various sectors such as security or aerial drone surveillance, but in the meantime the company anticipates having a significant impact in consumer- and professional-level photography within a few years.

"The improvements in the quality of optical components and reduction in their unit price that the smartphone has driven has allowed us to make this significant step forwards," said Laroia. "Only five or ten years ago the components were simply not in place to allow the L16 architecture, but today they are."