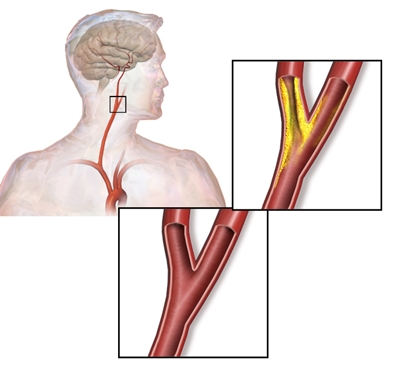 Under the Horizon 2020-funded “CVENT” (short for cardiovascular event) project, which runs for three years and is costed at €4.7 million, ten partners including Quantel are aiming to develop a portable, multi-modal, multi-wavelength PA system with an imaging depth of 3 cm.

The system will be used to image below the skin of a patient’s neck, enabling diagnosis and monitoring of plaque vulnerability in the carotid artery that carries blood to the head and brain.

More power: deeper imaging
Quantel, which has been developing the powerful but highly efficient laser diodes needed for hand-held PA imagers under the earlier “FULLPHASE” European project, will provide more advanced technology for CVENT to enable the required imaging depth.

Celine Canal, CVENT project manager at the Paris-headquartered firm, said: “The multi-wavelength diodes we provided for FULLPHASE are very short pulse, about 90 nanoseconds or less, enabling photoacoustic imaging at a depth up to 15 mm.”

“We started with 7 kW to 40 kW of peak power and are now up to 100 kW for CVENT,” Canal added. “This is accomplished by reducing the pulse width while maintaining high pulse energy (up to 4 mJ). In addition, it is essential that the lasers are very efficient in order to minimize heat in the handpiece.”

Laurent Schneider-Maunoury, who was recently appointed as general manager of the Quantel Group, said that the ambitious project had the potential to “revolutionize” the diagnosis of cardiovascular diseases.

Plaque risks
Cardiovascular disease – and, more specifically, the sudden rupture of vulnerable arterial plaques - remains the leading cause of death in middle-aged people. The PA imaging technology under development within CVENT promises to greatly improve doctors’ ability to make a successful intervention, by offering an imaging capability that simply does not exist right now.

In the carotid arteries feeding the brain, vulnerable plaque rupture causes a lack of oxygen in the blood feeding the brain. At the moment, a patient’s susceptibility is assessed by looking for narrowed arteries (or “stenosis”, in medical terminology) with conventional ultrasound equipment.

But because ultrasound can only provide information on the shape of arteries, it cannot distinguish between vulnerable plaques, which are prone to rupture, and stable, harmless plaques – meaning that those with the stable form are over-treated.

PA imaging is based on wavelength-specific absorption of laser light then re-emitted as imagable ultrasound, meaning that it can also give physicians functional information. Under CVENT, the technique will be used to identify plaque vulnerability markers, for example lipid pools and intra-plaque haemorrhage.

Though PA will have to prove itself clinically useful in patient trials, that should lead to a reduction in disabilities and deaths caused by undiagnosed cardiovascular disease, while marking patients into high-risk and low-risk groups so that physicians can apply appropriate treatment to each.

Modular laser production
Speaking with optics.org at last week’s Photonics West exhibition, Laurent Schneider-Maunoury – who joined Quantel a few months ago after a career in the aerospace sector – said that he believed PA imaging could also find future applications outside medicine, and in the industrial imaging sector.

Brought in as part of a reorganization that is intended to streamline Quantel’s processes and improve profitability, Schneider-Maunoury said that the company would look to imitate practices in aerospace by adopting a more modular approach to laser production – ensuring that its lasers were not over-engineered for certain applications.

Also last week, the company reported a 2 per cent increase in annual revenues to €63.3 million in its preliminary financial results for 2016, with increased demand from the medical sector outweighing a decline in sales for industrial and scientific applications.

However, profits are expected to be down on the 2015 level when the company presents its full report on February 28. Reiterating its production streamlining efforts, the firm said:

“Considering the visibility provided by the key contracts signed, the outlook for its major industrial clients, the dynamic development of its medical business and the various actions rolled out to improve its efficiency, the group is setting itself a target to continue growing its business and significantly improve its profitability by systematically looking for savings, productivity gains and synergies.”