In virtual reality, 'collaboration is the killer app'

Photonics West panel session gets philosophical on the topic of what's next in augmented and virtual reality. 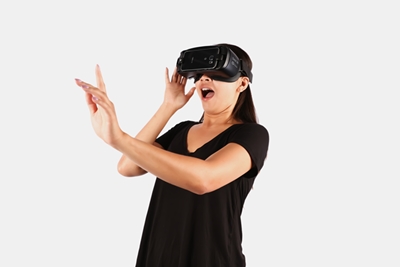 by Ford Burkhart
A blue-ribbon panel took a packed hall at Photonics West inside their world of augmented and virtual reality (AR and VR) last week and, in the end, turned philosophical about their essence.

Moderator Leo Baldwin, principal engineer at Amazon, said the goal of VR was just another step in creating alternate realities, like the entrance of movies into global culture. “It uses our eyes and ears for entertainment, for collaborating in design and engineering, to go inside a cell to see how a molecule works. With others in your team, you can go inside a 3-D car and work on it together.”

And Micah Tinklepaugh, of Meta Augmented Reality, made a point that resonated: Virtual reality doesn’t have to be great, just good. But it has to be compelling enough to move us to social interaction. “Look what Twitter did with just 140 characters. You don’t have to have all the pieces going to be successful.”

Sweet spot
The other panelists, at a session entitled “The Next Big Challenge in Virtual Reality,” were Scott McEldowney, lead optics researcher at VR pioneers Oculus, and Frank Black, director of B2B sales at HTC Vive. “What is the sweet spot we are trying for?” Baldwin asked.

“Everything is about optimizing for the user,” replied Black. “It’s not just building faster cars and selling more of them. It’s a simulation of physical reality. How do we simulate physical reality, with the illusion that it’s real? To create good content, it’s really tough.”

McEldowney said, “As an optical scientist, for me it’s not about pixel density, it’s the density you see in your eye. We need to get it ten times better than what we have today. That’s not going to happen any time soon.”

He added, “It’s not just a lens issue, it’s a system issue. It’s presenting images to the eye as the perceptual system wants to see them, it’s about display systems, tracking, calibration systems. There are unique compromises between these different factors.”

And it’s about having a device that “you will want on your head for perhaps three, four or five hours.”

VR has been for about 20 years, said Black. “It used to cost $40,000, and nobody could afford it. Then Oculus, said, ‘Let’s rock and roll, and put cheap plastic lens in there,’ and they created a beautiful software solution to a hard physical problem.”

Holography?
McEldowney said that future technologies must create “a fundamental shift in something that matters to the consumer. Better battery life. A shift in cost. Maybe allow us to have holographic displays. When we think about next generation display technology, we should think about what’s important to the end user.”

On the tech side, said Black, “Latency is the killer criterion for VR. When you feel sick, your body tells you your body is being poisoned. When you have latency, you have a horrible experience even with a beautiful image.”

Producing VR content, said Black, is astoundingly difficult. “You see the credits at the end of a movie, so many people made that movie. VR is ten times that, with all the inputs that have to come together. There’s a tremendous amount of science to put to work.”

Human experience
Black said the VR creators are phenomenal. “They are pioneering a whole new level of creation and art and science. How do you make stuff, make experiences that are compelling and new and exciting? And that make money? It’s a really exciting time, for the artists of the world, the developers of games and visual simulations. It’s a great time to be designing the hardware.”

He added one important lesson: “Don’t do things in VR that you wouldn’t do in the real world.” And McEldowney added: “We need to create compelling enough experiences that you won’t want to leave home without them. It has to be something that makes us smarter and improves our lives in an important way.”

Black underscored the thought: “Technology will march on: cheaper, better, faster. But there has to be the “compelling use” case. It’s about our human to human communication. Why use VR? Because you want some human experience.”

“Collaboration is the killer app,” Black said. “You can have car designers in London and in LA, looking at 3-D models. You have the auditory experience. When someone turns their head, you know what they are looking at. You forget that it is not real. You are there with that person. That’s an incredible experience, as humans.”