Durham, North Carolina, startup aiming to sell systems at a price of $10,000. 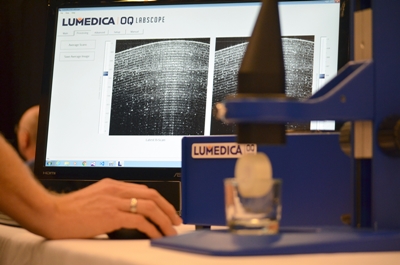 Founded in Durham, North Carolina, by an experienced team of engineers including chief scientist Adam Wax from Duke University, Lumedica’s debut scanner is priced at $10,000 – in a sector where entry-level equipment typically costs at least $35,000.

Bottom-up design
Wax explains that the low cost is achieved by using optical components already manufactured in volume for cell phones, coupled with a streamlined manufacturing process that reduces build time to a few man-hours.

“We designed it from the bottom up,” Wax said, showing off the shoebox-sized equipment at the Lumedica stand. Off-the-shelf components in the system helping to cut costs include an 840 nm superluminescent light-emitting diode (SLED) and a liquid lens.

Originally set up in 2014 but in stealth mode until recently, the company has won small business innovation research (SBIR) funding to aid the development process, but is now engaged in a more significant seed funding round. VP of marketing Scott Whitney said that Lumedica would be aiming to raise around $500,000 to further reduce the size of the scanner equipment so that the “2.0” version would be truly portable.

Startup Challenge
While OCT has proved itself to be an extremely effective diagnostic tool for ophthalmology, the cost of current systems means that it tends to be restricted to large, regional health centers. If proved to be effective, much cheaper systems could become widely deployed in “red flag” diagnostics – for example by optometrists – to pick up early signs of diseases like glaucoma and diabetic retinopathy.

Wax says that although important regulatory hurdles still need to be cleared, the technology has the potential to leverage the existing wealth of clinical evidence for OCT built up over the past couple of decades.

He represented Lumedica at the SPIE Startup Challenge semi-finals, which took place at San Francisco's Park Central Hotel January 31, and progressed to the final from the technology track dedicated to life science technologies.