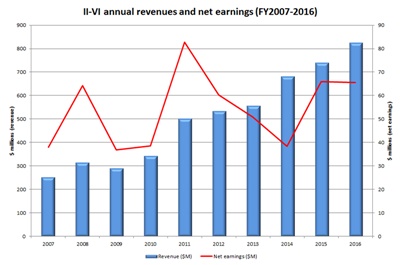 Diversified optics, photonics and materials firm II-VI has reported sharp rises in annual revenues, bookings and profitability in its latest fiscal quarter – along with a new CEO to oversee the Pittsburgh company’s planned build-out of VCSEL manufacturing capacity.

After nearly a decade as CEO and a remarkable 33-year stint at the company overall, Fran Kramer is retiring from day-to-day executive duties at the end of this month, although he is set to remain as II-VI chairman. Stepping up to the CEO role is Chuck Mattera, already the firm’s president and previously COO.

Strong finish for Kramer
In his last quarterly results call as CEO, Kramer was able to report strong numbers – with revenues in the final three months of II-VI’s fiscal year 2016 coming in above forecasts at $241.4 million.

Combined with higher profits, a solid rise in bookings and news that the company has already offloaded the radio-frequency device element of the Anadigics business that it acquired earlier this year as part of a strategic move to expand VCSEL production capacity, that sent the II-VI stock price up around 5 per cent.

Kramer said he was excited about the long-term growth prospects for II-VI, whose annual revenues have grown from just $5 million in 1983 – the year he joined – to $827.2 million in the year just reported.

Much of that excitement revolves around the use of VCSELs in consumer sensing applications, with II-VI planning to continue its investment in a build-out of VCSEL capacity based around the semiconductor wafer fabrication facilities it has gained through the recent acquisitions of both Anadigics and Epiworks.

“The additional research and development and capital platform investments we are planning to make over the next four to five quarters are intended to position us to capture a meaningful market share in end markets with expected growth in the billions of dollars over the next several years,” Kramer said.

“Many of these markets are still in the early stages of growth. While there are risks with respect to timing and speed of adoption, the platforms we are targeting build on many technologies in which II-VI has a strong competitive advantage. We expect the returns on our investment to be accretive within the next two years.”

Market ‘anxiously awaiting’ VCSEL ramp
The additional investment looks significant, with II-VI having negotiated a $100 million extension to its existing credit facility as it increases quarterly R&D spending by around 25 per cent on current levels. Annual capital expenditures are also set to rise by as much as $50 million compared with the year just completed.

Mattera - who becomes only the third CEO in II-VI’s 45-year history - picked up on the same theme, telling the quarterly investor conference call: “We believe that we have an excellent foundation on which to invest in the development and qualification of our 6-inch VCSEL platform.”

He added that much of the forthcoming investment was intended to establish a “scalable, high-volume manufacturing platform for optoelectronic materials and devices”, although cash will also be invested in the firm's Zurich, Switzerland, facility acquired from Oclaro a couple of years ago. It is largely focused on producing high-power 980nm laser diodes for pump applications in telecommunications.

“But the largest single investment is to expand our capability for making VCSEL devices and optoelectronic devices,” confirmed the incoming CEO. “We believe the market is large, growing, and is anxiously awaiting this kind of a capability to be put in place in the industry. We are expecting to lead in it.” 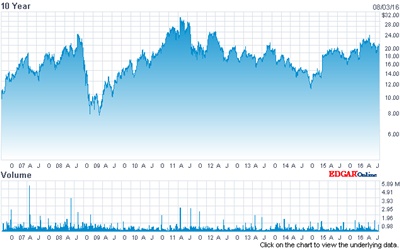 Precisely what all those VCSELs will end up being used for remains unclear, although it has been suggested that the emerging and potentially enormous market for automated vehicles may require such devices in the lidar sensors used to guide cars.

• II-VI’s Nasdaq-listed stock price closed the day up around 5 per cent following the latest earnings call. Trading at around $21.50, the price is equivalent to a market capitalization of approximately $1.3 billion.