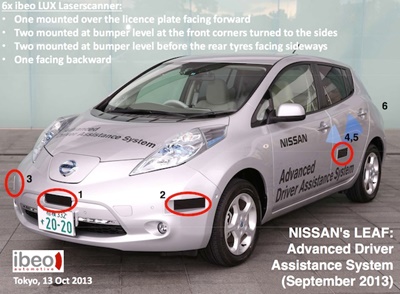 The automotive technology developer ZF has acquired a 40 per cent stake in fellow German company Ibeo Automotive Systems, which specializes in lidar technology and recognition software for autonomous driving.

The deal is the latest in a flurry of business developments focused on the laser-based ranging technology, after recent moves by firms including Denso, Ford, TriLumina, LeddarTech, Velodyne, Princeton Lightwave and others.

ZF’s CEO Stefan Zommer said of this latest deal: “Lidar gives us access to a core technology for environmental and object recognition.”

Going 'mirrorless'
ZF says that it will work with Ibeo to make the “next technological leap”, regarded as a significant step for vehicle applications of lidar. The technology under development is expected to deliver a three-dimensional image of a car’s surroundings without using the rotating mirrors contained in today’s generally bulkier automotive lidar systems.

“Thanks to solid-state technology, lidar technology will become more compact and easier to integrate into the vehicle,” stated the firm.

Ibeo’s CEO Ulrich Lages added: “We now have a very strong partner which is progressively shaping the megatrends of safety, efficiency and autonomous driving. With our comprehensive know-how, we can enable all driver assistance applications up to highly automated driving with 3D lidar technology.”

Hamburg-based Ibeo has previously worked with BMW, mounting its “Lux Fusion” lidar scanners on the auto giant’s “Connected Drive 5” series vehicle back in 2013. That car featured six lidar sensors, four at each side of the front and rear bumpers facing sideways, one below the licence plate looking forwards and another looking backwards at the rear of the car.

Robot taxi
A similar project with Nissan saw the same number of lidar scanners positioned slightly differently in one of the Japanese car company’s “Leaf” electric cars (shown in image above).

And in 2015 Ibeo set up a collaboration with Japan-based ZMP, which is aiming to introduce a driverless vehicle through the joint-venture “Robot Taxi” by 2020.

Under the terms of that deal ZMP was due to begin selling “RoboCar” vehicles with embedded Ibeo sensors. ZMP’s CEO Hisashi Taniguchi said at the time:

“We are excited to announce this collaboration with Ibeo , one of the world’s best laser scanner companies. The combination of Ibeo and ZMP will provide cost effective and high performance autonomous driving technology.”