Ford hooks up with MIT on lidar for pedestrian mapping 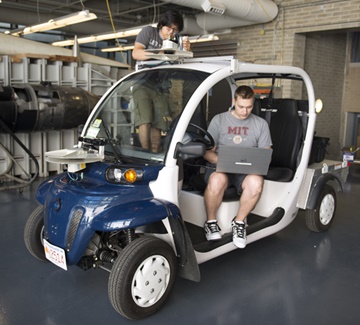 The Ford Motor Company is collaborating with Massachusetts Institute of Technology (MIT) researchers on the development of lidar techniques to improve public transportation by monitoring pedestrian flows.

The project, which involves MIT’s Aerospace Controls Lab (ACL), will introduce a fleet of on-demand electric vehicle shuttles operating on both city roads and MIT campus walkways in Cambridge, Massachusetts.

“The vehicles use lidar sensors and cameras to measure pedestrian flow, which ultimately helps predict demand for the shuttles,” Ford announced. “This, in turn, helps researchers and drivers route shuttles toward areas with the highest demand to better accommodate riders.”

Ford and MIT researchers plan to introduce the service to a group of students and faculty as soon as this September. This group will use a mobile app to hail one of three electric urban vehicles to their location and request to be dropped off at another destination on campus.

Efficient pedestrian detection
Over the past five months, Ford and MIT say they have used lidar sensors and cameras mounted to the vehicles to document pedestrian flow between different points on campus.

“Lidar is the most efficient way to detect and localize objects from the environment surrounding the shuttles,” they report. “The technology is much more accurate than GPS, emitting short pulses of laser light to precisely pinpoint the vehicles’ location on a map and detect the movement of nearby pedestrians and objects.”

The researchers use that data to study patterns of pedestrian traffic moving across the MIT campus, to better anticipate where the most demand for the shuttles will be at any given moment, and route the vehicles as efficiently as possible.

Ford has already launched a “dynamic shuttle” project at its Dearborn, Michigan, headquarters, where employees are able to hail rides via a mobile app. But the car giant says that the MIT collaboration advances that concept further by monitoring the movement of pedestrians to predict demand.

It adds that the algorithms and methods learned when navigating around crowded pedestrian areas with lidar will also strengthen the development of fully autonomous vehicles and more advanced driver-assist technologies.