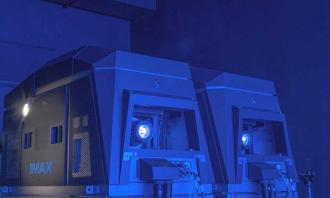 An agreement between IMAX and China cinema exhibitor Wanda Cinema will see the creation of 150 additional installations using IMAX equipment in the country - the largest new theater deal so far for the developer of big-screen and 3D projection systems.

Building of the theaters is due to start in 2017, with 110 of them scheduled to be complete by 2020. This deal expands an existing commitment by Wanda to create 120 new IMAX theaters by that year - which is now expected to be virtually completed by the end of 2016, no fewer than four years early.

In total this activity will expand Wanda Cinema's footprint of IMAX theaters to 360, with the full roll-out due to be finished by 2022.

As well as testifying to the buoyancy of China's cinema market - Forbes recently noted that the country's box office had already grown by 50 percent during 2016 compared to the previous year, and was likely to double in size again before flattening out - the deal is good news for advocates of laser cinema projection (LCP).

"Nearly half of Wanda's new IMAX theaters may be outfitted with new laser projection technology," noted the companies' joint announcement of the agreement. The rationale behind selecting sites for laser cinema deployment was not discussed, but in the past due consideration of regulatory frameworks and return on investment have been cited as the significant issues affecting LCP market penetration.

During announcement of the company's second quarter financial results last month, IMAX CEO Richard Gelfond noted that it was making continued progress towards reducing the costs of the laser system for customers, and that the intention was to deliver a product of similar cost to an existing xenon lamp platform within the next couple of years.

The company's Q2 data indicated that 31 IMAX laser-based digital theater systems were operational at the end of June 2016, with 19 systems then in backlog.

Speaking of the Wanda deal, Gelfond commented that "this is a landmark development in IMAX's history and a strategic linchpin in our growth strategy, particularly as we've seen over time that signings lead to installs, higher box office and ultimately more revenue."

Beam quality
IMAX began rolling out laser projection as a replacement for its proprietary 70 mm film format during 2015, fruits of a co-development arrangement with display specialists Barco and the incorporation of digital cinema technology originally developed by Kodak.

The system is known to use laser light engines manufactured by Barco, employing a pair of aligned side-by-side 4K projectors. Speaking to optics.org earlier in 2016, long-time laser projection advocate Bill Beck - now at Barco - commented that the technology has developed to the point where IMAX feels able to convert its existing lamp-based 70 mm screen systems over to dual laser projection units delivering enough laser power to light 120-foot screens.

"The lasers involved are relatively customized and market volumes are comparatively low, but the large venues and appropriate ticket prices of IMAX screenings allow the economics to balance out," he said.

• Barco technology was also central to the announcement of Asia's first all-laser multiplex in December 2015. As detailed by the company at the time, a new multiplex in Guangzhou, China, operated by JinYi Cinemas, will be exclusively powered by Barco's own laser display platforms - one flagship laser projector and a range of laser phosphor projectors.

The laser phosphor approach to projection was singled out by Beck as being a likely route to significant market penetration for the technology, away from the requirements of the highest-end cinema installations.