CNBP project offers new view of links between neuronal condition and drug use. 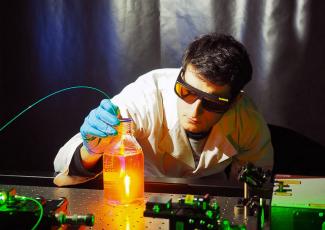 Heating up: a probe to measure brain temperature

Brain temperature is affected by a wide range of external factors, and in turn influences many aspects of animal behavior and health.

One particular class of external agent is stimulant drugs such as MDMA, that can have a pronounced effect on the temperature of several regions of the brain. This makes the measurement of those temperatures a potentially vital avenue of research into the pharmacology and toxicology of the drugs.

A new optical probe developed by a team at the University of Adelaide and the Centre for Nanoscale BioPhotonics (CNBP) might make these measurements easier to obtain from localized areas deep within the brain. The work was published in Biomedical Optics Express.

Optical fibers have been tried as a means to probe brain temperature in the past, but usually in the form of relatively large diameter fibers within which Bragg gratings are inscribed, allowing changes to the wavelength of light caused by rising temperature to be monitored.

The new probe aims to provide a less invasive and more effective method, by utilizing a thin layer of rare-earth doped tellurite glass on the tip of a conventional silica optical fiber. This localizes the sensitive area to a thin region at the front of the probe, potentially allowing it to take measurements from specific spatial locations in the brain. It can be interrogated using a portable optical measurement set-up, meaning that measurements could ultimately be performed outside of standard optical laboratories.

"Using this incredibly thin glass fiber we can track the changes in temperature that we see in the brain, allowing us to better understand what is happening across the neuronal and inflammatory pathways," commented Stefan Musolino of CNBP. "What our probe provides is an entirely new method for getting relevant biological measurements out of the brain for further study and analysis."

Turbo-charge neuroscience research
Rare-earth thermometry as a method of small-scale temperature measurements relies on changes to the emission spectrum of certain ions doped within a host media, as the temperature of that host varies. Comparing the emission intensity of two thermally linked energy levels within the overall spectrum allows the temperature to be assessed, once the device has been calibrated.

CNBP previously proved the concept for biomedical applications, but used bulk optics for coupling into the optical fiber probe and a bench-top spectrometer. The new device is a more compact and potentially clinician-friendly design, requiring no alignment and able to fit on a portable optical breadboard plate.

Testing the device in vivo involved measuring the brain temperature of ambulatory rats over extended periods, alongside body and ambient temperatures. Data indicates that the probe remains capable of delivering accurate readings despite substantial changes to the external ambient temperature.

The next steps will involve looking more closely at the effects of drugs such as MDMA, and on the implantation of multiple probes at different spatial regions of the brain - a potentially significant route to understanding the pathways involved in drug-induced responses.

Future scenarios could see a fully developed probe applied to human brains after traumatic brain injury or stroke, when the brain is extremely sensitive and vulnerable to small deviations in temperature. It could also be utilized for tracking hypothermia in infants during the first hours after delivery.

"Our long term strategy is to take this technology and to develop a multi-functional probe that will let us track not just temperature change, but also other biochemical activity in the brain as well," noted CNBP researcher Erik Schartner. "This has the potential to turbo-charge research outcomes in the field of neuroscience, greatly aiding our understanding of the brain, the most complex and complicated organ in the body."