Technique for real-time 3D-vizualization could impact neuroscience, hematology and other sectors. 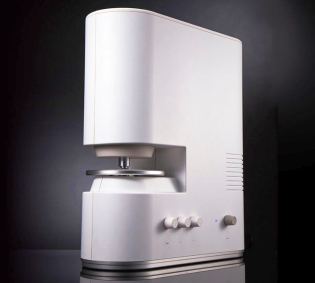 TomoCube, a South Korea-based developer of optical and microscopy platforms for bioimaging, expects its latest holotomography system to prove the value of the technique in a number of applications.

The company's HT-1 platform can provide researchers with quantitative high-resolution 3D tomographic images of live cells and tissues, without the need for staining or labeling, as well as time-lapse 4D video images of those cells over a 72 hour period.

"Holotomographic microscopy is an optical analogue of X-ray computed tomography - the difference being that the HT-1 uses laser illumination, whereas X-ray CT uses X-ray beams," said TomoCube CTO and co-founder Yongkeun (Paul) Park. "The HT-1 is the first system to achieve high-resolution tomographic microscopy with full optical/electronic control, and do so without having a mechanical rotation system."

As developed by Park and a team at the Korea Advanced Institute of Science and Technology (KAIST), the implementation of holotomography in the HT-1 uses multiple 2D holograms of a cell, coupled with various angles of laser illuminations, to reconstruct the 3D distribution of refractive index (RI) of that cell. The 3D RI map can then provide structural and chemical information about the cell mass, its morphology, protein concentration, and the dynamics of the cellular membrane.

Two particular optical operations incorporated into the platform allow this to be done, both based around interferometry: optical diffraction tomography (ODT) and quantitative phase imaging (QPI).

ODT involves the core measurement of the 3D RI distributions of biological samples, by acquiring multiple 2D complex optical fields diffracted by a sample at different angles and then applying suitable computational methods. Although not a new technique, recent advances in laser sources and detectors have enhanced the appeal of ODT in several bioimaging scenarios.

QPI, an existing methodology developed for the study of weakly scattering samples, derives quantitative information about the local thickness and refractive index of a specimen by measuring both the amplitude and phase information of the optical field. In many near-transparent biological samples, the significant optical phase delay can be used to provide imaging contrast when the amplitude on its own cannot, and allows the inherently complex optics involved in ODT to be somewhat simplified.

Dynamic micromirror device
In the TomoCube platform, a dedicated software suite called TomoView analyzes and ultimately visualizes the resulting RI tomograms, retrieving morphological and chemical information about the cells as well as mechanical data about elasticity and cytoplasmic viscosity.

The overall combination allows the system to display high-resolution 3D refractive index tomographs of cells, non-invasively observing the dynamics of live tissues without the need for labeling or contrast agents. In effect the RI, an inherent characteristic of the cell, provides the necessary imaging contrast itself.

"Labeling agents such as florescence proteins or dyes can cause phototoxicity or photobleaching," commented Park. "Our system avoids that while clearly identifying 3D shapes of cells and sub-cellular organelles, as the imaging contrast comes from the refractive index data and the intrinsic optical properties of the material."

A further key enabling technology under the hood of the HT-1 platform is the use of what TomoCube has christened a DMD - for dynamic micromirror device - developed for use in quantitative phase imaging techniques.

The DMD consists of many individually controlled and switchable micromirrors, used in the HT-1 for holographic illumination control as an alternative to conventional mechanical rotation of the light beam and effectively eliminating moving parts from the device.

"Using DMD technology under electronic control rather than mechanical rotation gives better system stability and makes the platform more robust," noted Park. "That stability is one distinct advantage of the HT-1 system, along with an improved optical resolution."

TomoCube envisages the HT-1 being equally suited to both research facilities and clinicians' offices, and has designed the system to be as compact as possible so as to allow for straightforward real-world implementation. At present the system is being used in Seoul National University Hospital, but Park commented that TomoCube anticipates soon bringing the technology to a broad range of bioimaging markets.

"In the near future we will be further demonstrating how doctors and scientists can use our technology," he said. "The HT-1 will allow them to expand their research and come closer to understanding some of today’s most challenging illnesses and diseases."

• The Biomedical Optics Laboratory at KAIST, directed by Park, is engaged in the development of bioimaging methods based on interferometry, scattering and other optical techniques. It recently demonstrated a technique for warning of the presence of dangerous bacteria on the surface of food, through detection of an optical scatter pattern created as the bacteria move.