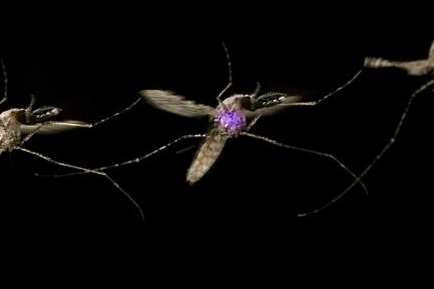 A laser-based system capable of tracking, identifying and then killing mosquitoes and other airborne pests is now ready for real-world deployment, according to the team developing it.

The “photonic fence” idea comes from a team at Intellectual Ventures Laboratory (IVL), in Washington State, US. Although the basic concept was put forward several years ago, with IVL starting on the project back in 2007, the group’s latest work shows how the system is able to distinguish between disease-spreading insects and animals or humans.

It also appears able to tell different insects apart, and even identify between male and female mosquitoes according to their wing-beat frequencies – meaning that the dangerous pests can be eradicated selectively, without the need for chemical or biological agents that would be damaging to other wildlife.

Eric Johanson, who officially goes by the forename “3ric”, and colleagues have been testing the system on two particularly troublesome pests: Diaphorina citri psyllids, which spreads the citrus greening disease that is said to have devastated orange groves in Florida, and malaria-carrying Anopheles stephensi mosquitoes.

When an insect is illuminated by a galvanometer-steered 532 nm pulsed laser, its characteristic wing-beat frequency produces an oscillation in light intensity that can be used for identification. “For identification, five sequential wing beats are needed,” the team reports, which for D. citri - whose characteristic flight pattern (see video below) involves a series of elegant back-flips - equates to some 27 milliseconds.

In the envisaged system, if the captured wing-beat pattern matches that of a target pest contained within a database, and a “safety interlock” confirms that there are no other organisms nearby, a near-instantaneous increase in laser power from the system’s “eradication module” is then used to kill it.

Towards smart pest control
One of the crucial elements of the work at IVL has been the development of an algorithm that is able to recognize the different insects accurately. Johanson said: “Our study showed that the ‘Photonic Fence’ is able to effectively track and distinguish between different insects by measuring insects’ wing beat frequency.

“We also confirmed that low-power lasers can indeed lethally disable the Asian citrus psyllid,” he added, noting that the total time taken for target acquisition to zapping the insect is just a tenth of a second. “These findings position the ‘Photonic Fence’ as an excellent tool to help citrus growers contain and eventually eliminate citrus greening disease.”

He envisages a point in the future where thousands of photonic fences feed back useful information about the prevalence of various pests at different locations and times of the day, month or year to a central database.

“Using this information on a regional, state or national level, we can make decisions about where and when to concentrate our pest-control efforts, whether they should be photonic or traditional,” Johanson suggested. “We will now be able to understand, for the first time on this resolution, the trends in insect behavior and the impact that our pest control efforts are having.”

And while the photonic fence would represent an expensive solution initially – at least when compared with the application of chemical insecticides – it ought to become relatively cheap if produced in large volumes, and without any negative impact on wildlife or heightened pesticide resistance among target species. 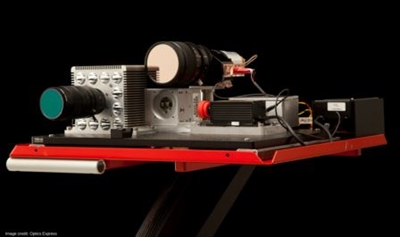 Cheap lasers deliver lethal dose
Earlier this year the same team published a study comparing the lethality of different laser pulses and wavelengths in the journal Nature Scientific Reports, discovering that relatively cheap and robust lasers had sufficient beam quality to maintain the necessary focus to deliver a lethal dose over a long range.

In the latest paper, Johanson and colleagues state that although the tiny size and high speed of the D. citris bug makes it a particularly challenging target, the tracking system worked well.

“The design of the system is flexible and allows for a wide window of detection in insect speed, through configuration of the retro-reflector width or image acquisition times,” they added. “Several photonic fence units may be integrated to provide coverage to larger areas.”

They also suggest that an additional layer of safety could be implemented by expanding the virtual boundary on the sides of the retro-reflector field of view. That would allow for a programmed emergency shut-off if a large object suddenly entered the field, such as a worker or farm animal.

The photonic fence study, part of a wider project to assess the impact of disease-carrying mosquitoes and other agricultural pests, is supported by the Bill and Melinda Gates Foundation Trust-backed Global Good Fund. Two US Department of Agriculture laboratories collaborated with Johanson’s team on the latest work.

Intellectual Ventures Laboratory, started up by a pair of Microsoft veterans in 2000, claims that 11 of the top 50 inventors in the US currently work with the company. In March 2015, IVL signed a research agreement with Rhode Island-based Lighting Science Group to develop “field-ready” prototypes of the photonic fence*.

* update (May 26): IVL has pointed out that the agreement with Lighting Science Group is no longer in effect.