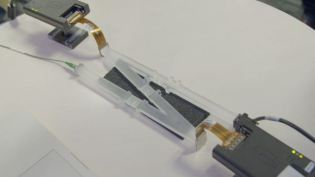 The complexity of the calculations involved in modern big data applications is increasing drastically, and looks all set to escalate further as demanding applications such as genomics make further advances.

Traditional high-performance computing (HPC) architectures based on electronics are starting to struggle to meet the performance requirements, as engineers come to recognize that the limits of Moore's Law may be approaching. New strategies will be needed, as indicated by the 2015 announcement by President Obama of a US National Strategic Computing Initiative and its declared aim of developing exascale computing.

Optalysys, a UK developer of optical high-performance computing hardware, believes that its technology could be a significant part of the answer for several specific applications. Having evolved from Cambridge Correlators, itself a University of Cambridge spin-out, the company has now designed a platform for performing processor-intensive mathematical functions such as Fourier transforms (FTs) by optical means. The device is potentially able to out-perform electronics-based HPC systems, and do so at a fraction of the cost and energy consumption involved in those traditional electronic systems.

Beating Moore's Law
Calculating FTs electronically is always a processor-intensive step, but an optical system can effectively carry out an FT operation on an optical input via a diffraction process, outputting an intensity pattern that represents a mathematical operation on the original signal. And it is potentially able to perform the calculations in parallel, allowing much more processing work to be carried out in a given time period.

In principle, the operation requires simply a low-power laser, suitable spatial light modulators (SLMs) to enter the data and process it as optical information, a lens arrangement, and a CMOS sensor to capture the result. But specific recent advances in hardware have played a large part in the current potential that Optalysys now sees for its system.

"This technology started life at about same time as microprocessor technology was developed, but until now we lacked the means to take proper advantage of what the optics could do," commented Nick New, Optalysys CEO and founder. "Early systems were well suited to pattern recognition operations in military contexts - identifying camouflaged vehicles or hidden structures in satellite images, for example, whereby the output pattern denoted the level of match and the relative position of the input and reference data. But these systems were large and impractical, with no ideal means of inputting large amounts of data."

Things changed for the better when smaller high-performance SLMs began to appear, driven largely by the progress of the displays sector towards high-resolution micro-displays. SLMs developed for those applications offered a solution to the data input challenge as well as increasing the potential power of the system.

"The timing was good for us," said New. "Our work on making the system more compact and rugged coincided with the development of liquid crystal SLMs, allowing us to put large numbers of liquid crystal devices in a small form-factor. At the same time, the realization began to grow in the electronics world that the limits of Moore's Law posed problems for large-model simulations and big data analysis."

Optalysys was formed to develop the Cambridge Correlators technology further, and its strategy has been to work on different focus areas through key partnerships. The first commercial target involves a collaboration with The Genome Analysis Centre in Norwich to develop a new Genetic Search System (GENESYS), intended to demonstrate the advantages of the Optalysys product in a real-world environment. A commercial product, in the form of a co-processor device able to fit alongside existing computer hardware on the desk of bioinformaticians with minimum disruption, is expected to appear by the end of 2017.

"This application is very much based on pattern recognition, reading in small strings of DNA and searching for a match within the millions of base pairs in a test database - conceptually similar to the original use of the technology to look for very small structures hidden within much larger data," commented New. "Our aim is reduce a process that takes 28 hours via HPC into one taking just 1.6 hours and consuming far less energy than an HPC operation in doing so, exploiting the liquid-crystal SLMs now available."

Fluid dynamics
These optical correlation operations involve comparing input data against reference patterns, producing intensity maps that can convey both similarity and relative alignment. But they are not the only class of computational analysis that Optalysys aims to exploit.

Another longer term goal is to exploit the calculation of spectral derivatives, performing via optical methods the kind of calculations that sit at the heart of complex fluid dynamics simulations in high-end engineering or weather forecasting. 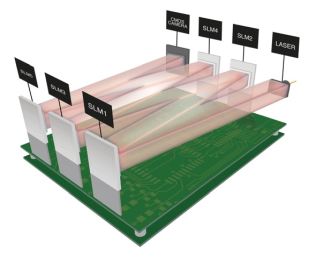 "This is a much tougher task, but it has very big potential," said New. "It fits well with our core concept of building a system using solid-bonded units aligned very accurately, because that approach means we can build up multiple stages to tackle larger mathematical functions, creating optical equivalents of what would be impractically large electronic systems. Combining multiple derivative stages together in this way could ultimately lead to all-optical derivative-solving systems."

Work towards this kind of optical equation-solving now includes a joint project with DARPA, announced in April 2016, under which a $350k grant was awarded to Optalysys for further research.

Announcing the project, Optalysys commented that its goal was to lay the groundwork for producing optical processing systems capable of the high-end tasks involved in computational fluid dynamic simulation models, in particular Direct Numerical Simulation - known to be the most computationally intensive operation in the field - and Large Eddy Simulation, a less intensive but also less accurate technique.

Despite the distinctly different natures of the optical correlation and spectral derivative operations, it may ultimately be possible to incorporate both functionalities into a single Optalysys device, using software to control the mode of calculation effectively being carried out by each frame of the SLM, rather than making physical alterations to the hardware itself. Other future avenues include work on lens-free architectures, in which SLMs function as focusing elements in addition to their role in data input, as well as removing the current need for managing the system via an external computer and a graphics interface, replacing them with on-board control.

"The genomics application is our first commercial focus, representing a defined computational task that is a good fit for our technology," concluded New. "But in the longer term we can see a widening range of applications, as the technology becomes something that can process large amounts of data on the desktop and is available to a wide audience."